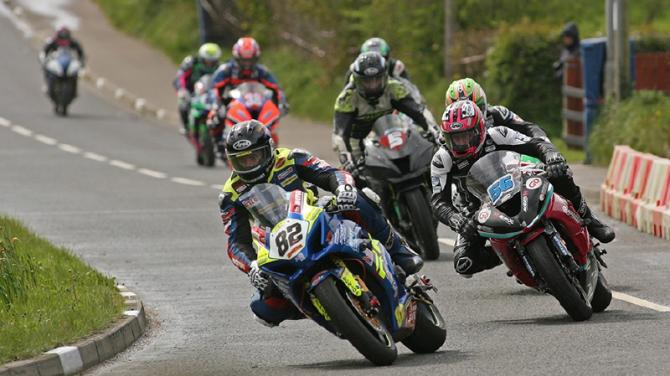 STORM Hannah created havoc across the province last weekend, but failed to dampen the enthuasim of the road race fans as they lined the Orittor circuit for the first road race of the season, the KDM Hire Cookstown 100.

Following clockwork practice sessions in tricky conditions, the club were able to run the planned races on Friday evening, with the exception of the Open race, which was held back to Saturday.

For race day, the Clerk of the Course Francis Everard rearranged the race programme, essentially to suit the weather, sending out the bikes that normally race on treaded tyres when it was wet, and the bigger and more powerful bikes that generally run on slick tyres, when it got dryer.

Mullingar’s Derek McGee started off where he left off last year, taking three wins and two more podium finishes, to claim the Man of the Meeting award.

A delay before proceedings started allowed the track to dry out a bit for the opening race of the day, the Braeside Bar & Restaurant Moto 3 race, in which Derek McGee had his first outing on the very tricky ex Moto GP Moto 3 Honda, despite leading from start to finish, it was local man, Nigel Moore who kept him honest, third went to Kevin Fitzpatrick, with Paul Gartland having his first run on a 125 in 4th ahead of newcomer Sam Grief.

Best of the supersport 300 runners in the Moto 3 race, Barry Davison took the honours in both the 350 and 500 classic races, despite a last lap incident with a lapped rider, Davison managed to stay on his machine to take the win in the Keylight/Designlab Junior Classic race, from Ed Manly with Nigel Moore again on the podium in third.

Brian Mateer was the winner in the quarter litre class finishing 18 seconds ahead of Philip Shaw and Gary Hutton.

Davison had a five second advantage in the Loughran Commercials senior classic race, again from Ed Manly with John Leigh Pemberton in third ahead of jovial Scot, Wattie Brown, who had a troublesome practice and had to start at the rear of the grid.

Billy Lyle was 9th with Freddie Stewart in 10th.Trevor Stewart was 5th in The 1000 class.

The JMB Coaches/lafarage Lightweight 400/ Forgotten Era produced an exciting three way battle for the lead at the flag it was a dream win for Paul Williams on his first outing on the local PK Racing Yamaha, second went to Stephen McKeown, with Alaistair Haworth retiring on the penultimate lap.

A titanic battle ensued throughout the Hayes Fuels Supertwins race, where despite all attempts by Adam McLean on the McAdoo Kawasaki, it was Derek McGee (KMR Kawasaki) who was in front when it mattered, Michael Sweeney was a close third.

The Mid-Ulster District Council Supersport race provided some fantastic action, but unfortunately, it didn’t get to run the full distance, due to the wind blowing a bale out on to the track, the race was red flagged on lap five.

This time, McLean got the win he deserved, by a mere 0.3 seconds, with McGee in second and Paul Jordan a close third.

The first open race of the day was, another close affair, until the last two laps, when Derek Sheils (RK Racing Suzuki) pulled a three second gap to take the win from McLean who just got the better of McGee.

An impressive ride from Thomas Maxwell saw him take fourth ahead of Paul Williams and Neil Kernohan.

The final race of the day, the KDM Hire Cookstown 100 started off in dry conditions, but a rain shower came on, and the CoC wisely stopped the race, in the five lap rerun, Adrian Harrison crashed out, and the race was again red flagged.

The two stoppages effectively ruined what would have been yet another fantastic race, this time, it was Derek McGee who was in the right place at the right time, to take the win form Derek Sheils and Adam McLean with a mere half second covering the top three.

A big thank-you to everyone involved, this Friday and Saturday, the road race action moves to Tandragee.

Moving onto Sunday, and its round Three of the Irish Mini Bike Championships at Nutts Corner.

Lewis Mullen will be looking to extend his lead in the newly introduced Bam Bam class.

Matthew McCord, along with Joe Quinn, Nancy Armstrong, Neil Glasgow are amongst the other locals in action.

As we go to press, there is also a chance that a top flight road racer may also be in action. Practice from 10am, racing from 11.30am.