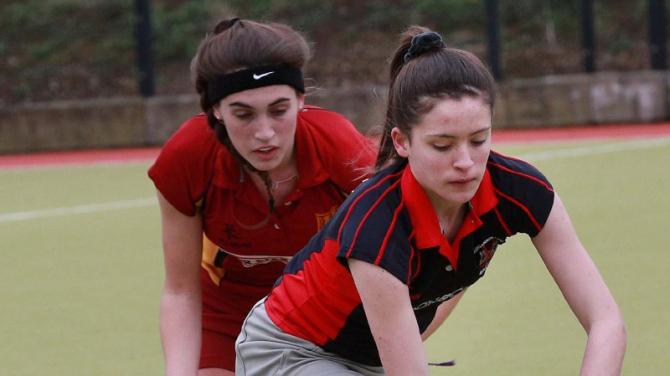 Both teams started strong both in attack and defence. Dungannon won the first corner of the game through a string of stick tackles through the Mossley defence.

Jess Hood’s drag flick took the lead for Dungannon. This gave the home side a boost before the half time whistle where they performed great runs through to the circle but couldn’t find the net.

Mossley linked well and had their chances, winning their first penalty corner.

A strong hit flew into the bottom corner to level the score sheet to 1-1. The second half saw better linking play from Dungannon through the mid field of Georgina Mulligan, Sarah Armstrong and Karen Elliott who found Leeanne Cassells in the circle.

A reverse shot from Cassells regained Dungannon with the lead. Mossley continued to press Dungannon and won another penalty corner where an initial save from ‘keeper Victoria Kerr saw Karen and Jill Elliott double team to clear the ball out of the circle and on the counter attack, linking through Ellie Greenaway on the wing found Dungannon in the attacking circle again.

This time the girls were award a penalty corner for a foul from the Mossley defence. With pitch conditions, Dungannon were forced to pull off an unrehearsed move and quick thinking from Georgina Mulligan saw Zoe Henderson at the top of the circle who did not hesitate to strike the ball into the bottom corner to take the home sides lead further to 3-1.

Efforts from both sides continued strong with both sides creating chances. However the final score remained 3-1 to Dungannon.

A great result for a developing team of young talent. Thanks to everyone on the sidelines for supporting the girls. Dungannon play QUB on Wednesday night at RSD passback 8pm.

Again, all support is welcome.