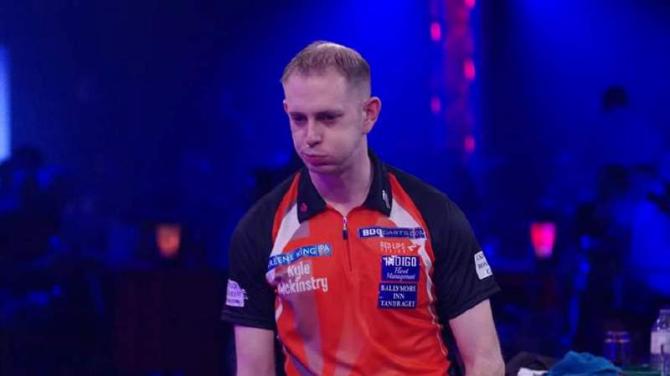 MOYGASHEL’S Kyle McKinstry has told the Tyrone Courier he is delighted to have made it to the quarter finals of the BDO World Championships.

In only his second appearance at the World Dart’s Championship at Lakeside Country Club, Kyle, 32 battled through from the first round putting in some impressive performances before ultimately falling to Glenn Durant, the competitions overall winner.

Speaking to the Courier after he returned home, Kyle said he was proud of his achievements.

”It was a brilliant tournament and I can not believe I reached the quarter-finals,”  said Kyle.

“It was some experience, right from the start when I was drawn against Chris Landman, I knew it was going to be good.

“I had played against him on the Isle of Man last year and he beat me then. Thankfully this time around I was able to beat him 3-2. It was great to get one over on him.”

In the quarter-finals, Kyle faced the Canadian David Cameron and beat him 4-3. Starting well Kyle took a quick 2-0 lead. However, a break in play seemed to disrupt Kyle’s flow and Cameron shot back, taking a 3-2 lead. Things looked bleak for McKinstry with Cameron needing only three darts to secure victory.

Remarkably, Kyle managed to battle back and won the last three legs of the match to win 4-3.

In the quarterfinals, the 32-year-old  came up against Glenn Durrant.