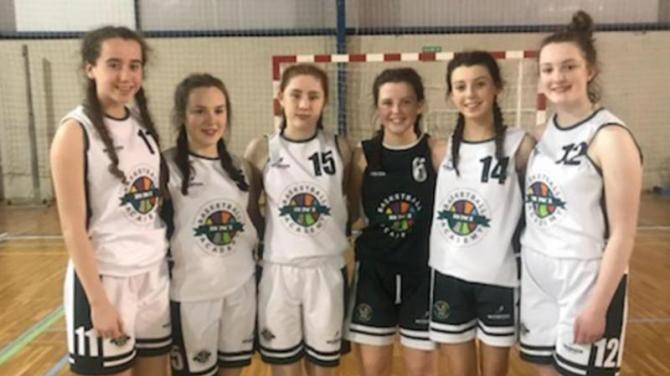 TYRONE Towers teams battled all weekend and their effort paid off as they made a clean sweep of all five games in both junior and senior action.

Towers U12 boys, U14 girls and U18 boys took to the road on Saturday to Newry to face Newry Flyers where each team performed very well to take all three games from the hosts.

Towers U12 boys got back to winning ways as they worked very well on team offence for such a young developing team.

U14 girls took to the Court, determined to take home the second win on the day. An excellent display of midrange shooting earned Maeve Lyons unanimous match MVP honours, and she was backed up well by Nicole Donaghy at both ends of the court and an excellent defensive display from Catherine Moohan.

Towers trailed the first half, eyeing up their opponents to see what they had to offer.

The third quarter told the tale, and the tide turned in favour of Towers, through their dogged persistence and team play.  The points came from inside the key in the battle of the big men, with Schofield, Kelly and Zagrekalis, coupled with great assistance from the outside from A Donaghy and S Donaghy, along with Hand and Zillonis chipping in.

Sunday held the promise of a doubleheader, with the Division 1 side taking on local rivals of Wolves and Premier facing Ballymena.

The first match was an epic battle, where the lead continued to change hands as there was never any difference between the two teams.

Towers were though frustrated in the first half. However, they held their nerve, and proved their worth in the last quarter as the Towers held out to take the win 54-52.

Earning joint match MVP honours were L Jelizarovas and S Treanor, through their leading by example from the point, leading through offence and some great defensive work.

Premier Towers faced up against Ballymena to take the final win of the day, and the matchup of the day was of the eventual unanimous match MVPs for both teams, between Towers S McGahan and Ballymena’s M Murray in an epic battle of the big men.

The whole match was neck and neck, even with Towers taking a 10 point lead, Ballymena refused to give it.

Sheer grit and determination on defence and patience on the offence led to final win of the day Towers to complete the perfect record, Towers 72 Ballymena 63.

Towers return in the new year on Saturday 5th January as Towers U12 girls, U14 girls and U18 boys play host to Belfast Star and taking to the road on Sunday are Towers U12 and U14 girls and U12 boys as they travel to face Anderstown Tigers.

Towers Girls who travelled to Molina, Spain at the weekend as part of TeamNI to participate in International competition.

Friday night saw the U16 girls up first, starting the weekend off right with a convincing victory over the hosts Molina, 46-19.

They travelled to San Javier to play four more games, winning three out of four, beating the hosts once again 60-53, beating Molina 53-50, Maristas De Murcia 38-30 and only losing out in the final match after a long day, versus Molina 35-42.

The U18 girls also performed very well, competing against some established ladies teams.

The U18 girls won two out of four games, but all the matches were extremely close.

Congratulations girls on such excellent results, which will pour over into the second half of the Towers basketball season in the new year.