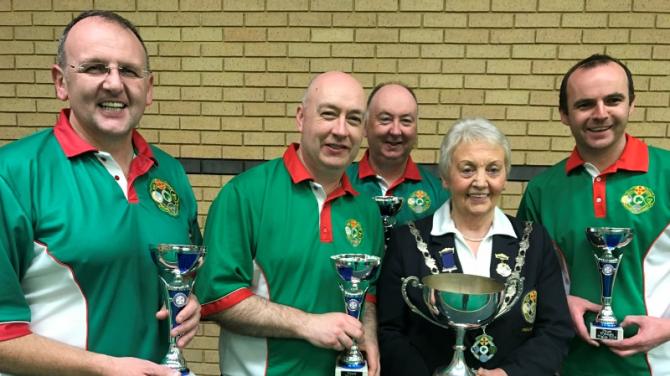 They were part of the successful Irish team at the championships in Wales at the weekend.

Mid-Ulster had Colum McHugh and Mark Wilson as part of the Ireland international team while the Cookstown Parochial quartet of Colum, Paddy Hanlon, Keith McCulloch and Liam McHugh represented Ireland in the Individual Rinks.

All were part of one of the most successful Irish performances in the championships, with Ireland winning the Premier team championship, recovering from a first game defeat by Wales to comfortably win.

In the Rinks, it was a last game win for the Parochial four, with the final game against the Scottish four in what proved to be a tight and enthralling game.

McHugh’s rink needed to win the game to secure the title and a three on the last end achieved it.

It was a very special championship for Colum McHugh who won his 100th cap in the third game.

Colum made his debut back in 1989 and has proved himself to be one of the outstanding players to represent his country and a player who has been an automatic selection. It will be some considerable time before any other player reaches such a remarkable number of appearances.