Six of the best for Cookstown bowlers 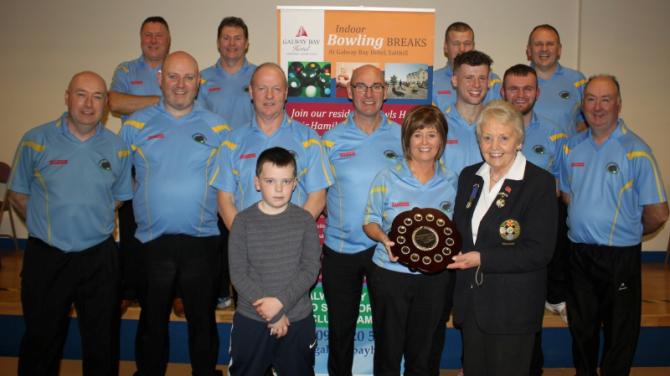 COOKSTOWN Parochial continued Mid-Ulster’s dominance of the Galway Bay Hotel Club Championship with their sixth win in the 15 years of the competition, added to the three won by Cookstown High.

This year’s competition produced a number of very close games and the Parochial were involved in several of these.

They began with a game against Donegal’s Ballylennon coming away with a single shot win.

Their second game saw a clash with three times winner St Mark’s Portadown winning 26–19 thanks to a 12–4 win by Damian McElroy’s rink.

The quarter finals involved Parochial in another cliff hanger when three down with one single end to play saw them picking up a four to win 24–23 with McElroy’s rink again the deciding factor winning 11–5.

There were wins for Magilligan over 1st Ahoghill, Maghery over Spa GC and Bishop Street over Sydenham. In the semi finals Parochial had a comfortable 36–11 win over Magilligan while Donegal’s Maghery defeated Bishop Street 33–24.

It was Maghery who got off to the better start in the final with Colum McHugh 8–0 down after three ends. Again, it was McElroy’s rink which was keeping his side in the game.

It was not until the sixth end that Parochial began to take control with Sean Quinn and McElroy’s rink picking up crucial shots. Parochial finished 27–19 up with Colum McHugh 6–10 down to C Glackin, Sean Quinn 9–7 up over J Glackin and Damian McElroy 12–2 up against E Walsh.

In the Plate competition there was also a Tyrone victory.

The quarter finals saw Ballylennon, Kilskeery, Derramore and Wellington enjoying wins over Dunluce, Rock, Spa GC and Eglantine. In the semi finals Kilskeery proved too strong for Ballylennon with a 23–11 win while Derramore gave Wellington the boot on a 26–22 scoreline.

The final produced an excellent game with the lead changing hand in virtually every end. The game went to the final bowl with Kilskeery winning 25–24. J Beattie beat J Rankin 8–6, D Wilson lost to B Rankin 8–12 and T Brian beat A Rankin 9–6.

It proved to be an excellent day’s bowling and thanks go to Galway Bay Hotel for their continued support of the competition.