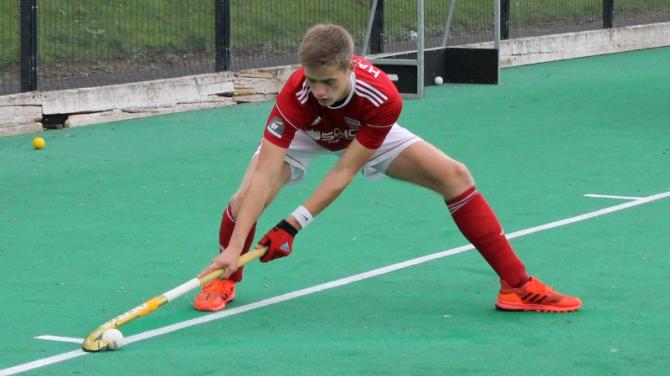 COOKSTOWN had an almost perfect start to their EY Hockey League campaign with a big 7-1 victory over Dublin YMCA at Steelweld Park on Saturday afternoon.

Some had pegged these two sides as vying for the bottom spot and had this as a virtual must-win despite being the first game of the season. For much of the first quarter it looked like it would be a very even match with YM playing some really good hockey against the home team.

However, Irish U21 international Michael Kerr broke the deadlock on 10 minutes with an unstoppable drag from the short corner set piece for the Tyrone men. And two minutes later Timmy Sloan claimed the first of his brace, losing his marker to deflect Matty Rollins’ pass over the line.

YM stabilised the ship and both sides created several chances. With five minutes to go in the half Stuart Smyth slotted home from a penalty corner after a period of Cookstown pressure. For much of the remainder of the game Cookstown were dominant with Stewart Wylie, Kerr and Smyth to the fore.

Cookstown went 4-0 up thanks to a great piece of stick skill on the baseline by Mark Crooks. He weaved his way past two defenders and the goalkeeper for Sloan to tap in at the back post. Stuart Smyth then smashed his second of the game with another powerful flick at short corner time.

A nasty clash of heads between YM’s David Robinson and Cookstown’s Paul Thompson held up play for a period and YM slowly worked their way back into the game. A bad challenge at the top of the circle saw a penalty flick awarded for YMCA and Ben Campbell left Josh McCabe – who made a number of outstanding saves – no chance.

Cookstown might have been forgiven for sitting back and seeing out the match, but they kept attacking and were rewarded with another goal from the set piece with Jack Haycock turning the ball over the line. Stuart Smyth finished the scoring with his third of the afternoon.

“We seemed a bit nervous for the first quarter, but once we got into our stride and settled into the game we controlled the play,” Cookstown captain Greg Allen said. “We got a lot of joy down the right and continued to win a few corners that we executed.

“Stu Wylie caused a lot of problems up top and time after time put their defenders under a lot of pressure. We have worked very hard on our corners over pre-season and it paid off as we slotted in five.

“Next week against Lisnagarvey will be another tough test but every week in the EY is tough! We’ll get back to the drawing board at training and see if we can improve it again for them.”

In the other matches, Cookstown II lost out by 5-1 to Instonians while Cookstown III were held to a 1-1 draw by South Antrim II. Cookstown IV also drew against a very strong Newry II team. Cookstown Ladies had a very difficult start to their season, away at Limavady, and unfortunately fell to a 4-0 defeat.