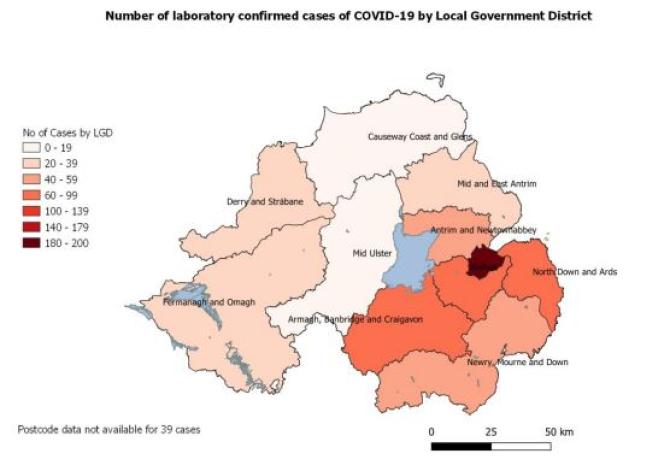 THE number of people who have died in Northern Ireland after being diagnosed with Covid-19 has risen to 30, as an expert NI modelling study indicates that a peak in the first wave is expected from the beginning of next week.

It was also confirmed there has been a further 103 new cases, bringing the total number of cases to 689.

Nineteen patients have tested positive for Covid-19 in the Mid-Ulster District.

The latest update comes a matter of hours after Health Minister Robin Swann announced the key findings of a study carried out to inform intensive hospital planning for the forthcoming surge in Covid-19 cases.

The modelling indicates that the peak of the first wave of the epidemic is expected between 6-20 April 2020.

And under its 'reasonable worst case scenario', the projected number of cumulative Covid-19 deaths in Northern Ireland over 20 weeks of the epidemic would be 3,000.

“In summary, the research indicates that our health service would have a realistic prospect of coping in this initial period if a sufficient proportion of the population adhere to the social distancing and self-isolation measures,” Mr Swann said.

“However, it is important that this is considered in context, and I would emphasise that it provides no grounds whatsoever for dropping our guard. On the contrary, the projections underline that the continuation of rigorous social distancing will save many lives and protect our health service from collapse.

“In addition, the absence of a vaccine means we will have to plan for a potential second wave of Covid-19 cases later in the year.”

The modelling outcome sets out a 'reasonable worst case scenario', based on a number of assumptions including social distancing measures producing a 66% reduction in contacts outside the home and workplace.

In addition, 70% of symptomatic cases would adhere to case isolation.

The modelling team’s best judgement is that this would lead to a peak number of 180 Covid-19 patients requiring ventilation and critical care beds during the first wave of the epidemic and that the peak number of COVID-19 hospital admissions would be 500 per week.

The modelling team authors emphasised that the work is not a prediction or forecast, rather a model for planning purposes.

"Future modelling will focus on the size and shape of this depending on how/when restrictions are relaxed or re-introduced.

"This will remain the case until there is substantial population immunity either as a result of recovery from infection or successful vaccination.”

A total number of 6,450 Coronavirus tests have been carried out in Northern Ireland of which 5,751 returned negative.