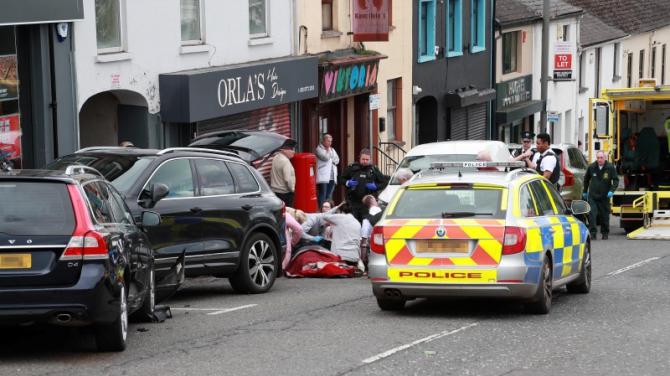 A CHARGE of leaving a car in a dangerous position after it mowed down two people on a busy Dungannon street was withdrawn yesterday, Monday.

Tommy McCrystal (84) from Ard Gannon, Dungannon had been accused of committing the offence on 3rd June, 2019.

It was alleged he was in charge of a Volvo vehicle at Little Scotch Street, Dungannon which he left to remain at rest on a road in a manner likely to cause any obstruction or danger.

Last week at Dungannon Magistrate's Court a defence barrister explained an engineer’s report may be required and while McCrystal accepts parking his car in a layby, there is dispute around whether or not the handbrake was on.

The court was told last week that the car in question is fitted with a device which automatically applies the handbrake once the central locking is engaged.

The defence explained there is some doubt whether the autobrake applies when the vehicle is in ‘Park’ rather than ‘Neutral’ – the position confirmed by Police at the time of the collision.

It also emerged there had been discussions with the Prosecution in the interim who at that stage confirmed the case was continuing.

The defence suggested a possible “third way” to deal with the matter, which may involve the court studying the vehicle’s operational manual.

He added: “The issue is whether the car has to be in ‘Park’ for the autobrake to apply.”

District Judge Michael Ranaghan agreed and a number of adjournments followed until yesterday (Monday), when a prosecuting lawyer unexpectedly advised that the case was no longer proceeding and the charge was withdrawn by way of caution.

At the time of the incident, there were early reports the car in question had been stolen but Police quickly moved to dispel this.

It was contended a car “careered” down Scotch Street, Dungannon, mounted the pavement and struck both men.

Mr Cush had been buying gardening equipment in SA Trotter's hardware store situated on Scotch Street shortly after 10.30am when the incident occurred.

Mr Trotter was assisting Mr Cush to load equipment into the rear of his car when they were struck,

Both men sustained head trauma, with Mr Cush also sustaining severe injuries to his legs and Mr Trotter to his arm.

Mr Trotter was taken to Craigavon Area Hospital and Mr Cush was rushed to the Royal Victoria Hospital in Belfast.