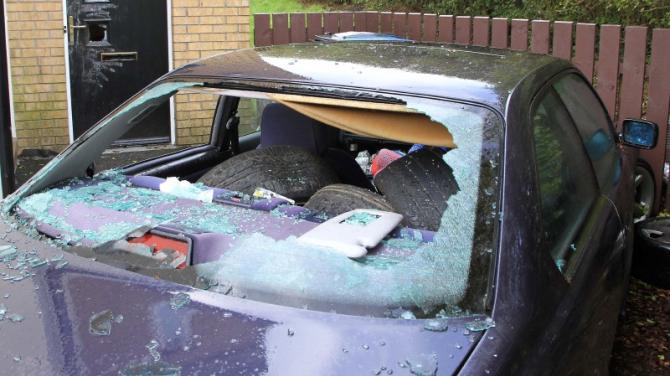 A 15-YEAR-OLD and a 34-year-old man have been arrested following an arson attack on a Dungannon family's home, where a young child and baby were inside, on Sunday night.

Detectives investigating the attack in the Killymaddy Hill area of the town confirmed that the incident took place shortly after 9pm.

Police received a report that two males arrived at a house and it is understood that one of them may have been armed with a knife.

When Police arrived at the address, it was reported a petrol bomb had been thrown at the property, and a garden bench had been used to ram the front door, breaking a pane of glass.

It was reported a second petrol bomb was then thrown into the house and Police have subsequently arrested a 15-year-old male on suspicion of arson with intent to endanger life, while a 34-year-old man was arrested on suspicion of offences, including possession of an offensive weapon in a public place.

Police are appealing for witnesses or anyone with information to come forward following the "reckless" attack.

Detective Sergeant Robinson said: "None of the occupants in the house, which included a man and a woman and young child and a baby, were injured, however this must have been a terrifying ordeal for them. This was a reckless attack which could have had a devastating impact, resulting in serious injury or worse.

"We would appeal to anyone who was in the area last night at around 9pm and saw what happened, or anyone who may have been in the area earlier in the evening and saw anything out of the ordinary to call our detectives on 101, quoting reference number 1402 09/02/20."

At the time of going to Press, both males arrested on Monday morning remained in custody.