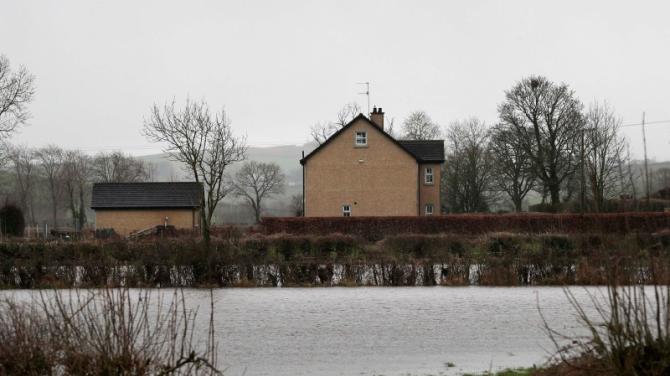 TWO people have been rescued by Firefighters in Augher after becoming trapped in a car in flood water.

Crews pushed the car out of the water to safety during the rescue on the Lisnawery Road on Sunday morning.

Crews from Clogher Fire Station arrived at the scene on Lisnawery Road just after 7.50am and got the vehicle to safety, with no injuries, just before 9am.

Storm Ciara has wreaked havoc across Mid-Ulster over the weekend and a yellow weather warning for snow and ice remains in force until midnight tonight (Tuesday).

The Kingarve Road to Bush junction was flooded with a vehicle becoming stuck. The road was not passable while this was resolved.

A telegraph pole was down on the Draperstown Road, Desertmartin which blocked the road on Sunday.

Northern Ireland Water also dealt with a burst pipe affecting the Cookstown Road area of Dungannon and water supplies were off.

Among the chaos of Storm Ciara, only 15 Mid-Ulster homes were affected by power cuts over the weekend and no local schools had to close.

Traffic Watch NI said; "Temperatures are forecast to fall below freezing and there is a risk of snow and ice on roads.

"The salting of roads on the scheduled network considered to be at risk is planned.

"Road users are advised to exercise caution when travelling, particularly when driving on untreated roads."

You should note the following numbers in case of emergency: