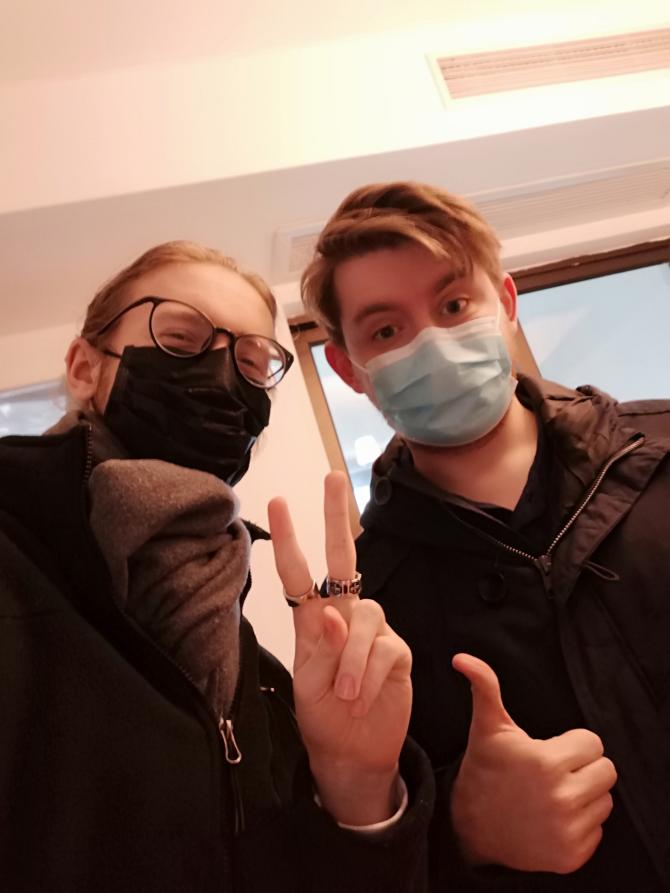 TWO Dungannon teachers are among the 94 patients currently living in the UK’s coronavirus quarantine centre after being evacuated from the Chinese region where the outbreak started.

Twenty-three-year-olds Ben Pinkerton and Joshua Drage were on the repatriation flight from Wuhan which arrived at RAF Brize Norton in Oxfordshire on Friday, before being transferred by coach to spend 14 days in quarantine at Arrowe Park Hospital in the Wirral, Merseyside.

A further 11 British nationals were flown back from the Chinese city on Sunday, however only 10 of the 11 scheduled passengers arrived at the quarantine facility.

It is understood that one individual begun to feel unwell during the second evacuation flight and was moved to another hospital for tests.

The remaining evacuees joined the 83 others already being held in an accommodation block at the hospital for a fortnight to monitor for any symptoms of the virus.

Speaking to the Courier from inside the quarantine facility on Monday morning, Ben described the mood as “quite bright” and praised the work of the hospital staff.

“We're currently at Arrowe Park hospital and the mood is quite bright I would say, the NHS staff are being a phenomenal help, and their assistance is keeping most people happy and contented,” he said.

Ben and Joshua had been living together in the Hankou district of Wuhan when the outbreak happened, after moving there to teach English over a year ago.

In what was his first weekend in quarantine, Ben said the living situation – which is an apartment housing five individuals, with a further downstairs communal area –  isn't too different to that which he experienced during the lockdown in China’s Hubei province.

“It is very similar to the way we were isolated back in Wuhan anyway so I'm pretty used to it. We have TVs with internet access through WiFi and games consoles they have provided. I can open my windows and I can see over the exterior of the hospital,” he explained.

“We can go downstairs freely but everyone wears a mask. We can't physically leave the facility. I can keep busy though, so it is not a problem.

“Life in Wuhan after the outbreak presented an understandably drastic change to how daily life went, we had to self isolate ourselves and stock up on food to prevent the need for going outside.

“We just planned work for our students, watched movies and read books each day, there wasn't much else to do. However, our attitudes were fine, we just got on with it!”

Although, Ben admits residents of the region didn’t realise the enormity of the situation, which was declared a global emergency by the World Health Organisation on Friday.

“The citizens were aware, but I don't think they fully appreciated the severity of the situation until the Chinese government locked down the city, that's when the message was really sent across the country that this was nothing to be sniffed at,” he said.

The English teacher has kept in regular contact with his family back in Dungannon since the outbreak, and while they have been able to order food and eat takeaways at the quarantine facility, he joked it is nothing on his grandmother’s cooking.

“I've been in contact with my family throughout the situation, there are many details that don't get shared though, as you don't want to cause any unnecessary worry or fears,” he continued.

“Upon release from quarantine we will most likely head to the city of Chester a few minutes south of the quarantine facility, as that is where our university was, so we have many friends there.

“I'll probably be making my way home to Dungannon a week or so after that to see my family members.

“I'm looking forward to getting back to Dungannon and seeing everyone, my grandmother especially, as she is a great cook and will be eager to get some food in my belly. I know I won't be voicing any objections to that objective!”

“It’s [China] an incredibly unique and beautiful country, moreover, the nation has a lot to offer, especially for foreign professionals,” he said.

“Despite that, I feel like many of us wouldn't feel comfortable returning for a considerable period of time, to ensure that the virus has been effectively neutralised. Perhaps in a nine months to a year we may go back, but it would be to a different city like Shanghai or Hangzhou, where the quality of hygiene and living environment is significantly better than that of Wuhan.”

Ben confirmed that no one on his flight or within his accommodation block have showed signs of the virus thus far.

Joshua Drage spoke to Radio 4 on Sunday morning and said that his accommodation at the quarantine centre was basic but said he had everything he needed.

He described getting off the plane at RAF Brize Norton as unsettling after he and the other passengers were met by medical staff in white overalls and masks.

A teacher in Wuhan, Joshua said he felt fine but like others in quarantine he would rather stay for the entire period in quarantine to make sure he was OK rather than return to Dungannon and risk others.

“I am happy knowing I am being checked out here and my bed in Dungannon can wait,” he told Radio 4.

The Dungannon man said he continually wears a mask in the quarantine accommodation and the only communal place is the kitchen, however all those in quarantine are not allowed to mix in the kitchen and only go there individually for food and drinks etc.

He added that everyone had to adhere to a strict health policy including the washing of hands.