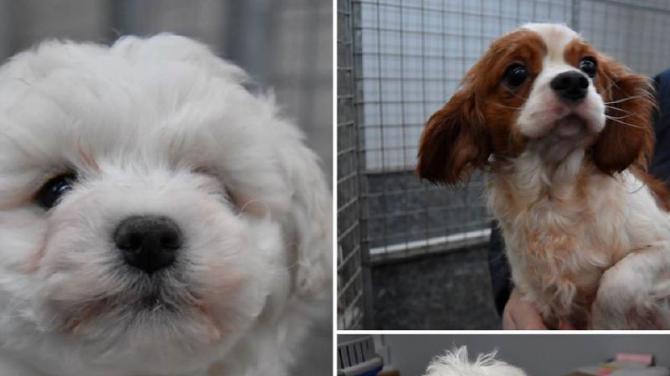 DOGS seized from Coalisland puppy farm have started to be re-homed, Police have said.

The operation saw the arrest of two men and rescue of 31 dogs, including puppies, as part of a proactive operation by Police.

This was the latest stage of a major investigation into organised crime in the area, which has been ongoing for several months.

The men, aged 43 and 42, were arrested on suspicion of fraud by false representation and both have subsequently been bailed pending further enquiries.

Police have provided an update on the situation, thanking the public for their support; “We thought it was timely to give you an update on our seized dogs and pups from before Christmas.

“The response has been overwhelming and we want to thank you all for your support. It truly has been immense.

“As regards the dogs, we have some good news but unfortunately also some sad news. The good news is that the re-homing process has now started. Our partners in Mid-Ulster District Council are liasing with numerous Animal Welfare charities to ensure these dogs and pups get the homes they deserve.

“Unfortunately we can't disclose specifically where the animals have went but please be assured people are now working hard to get them re-homed as soon as possible. The best advice we can give - if you are looking for a dog, please visit your local re-homing centre. They are full to bursting at present and are always happy to see people willing to offer loving homes to these animals.

“As for the sad news - two of the puppies we seized have subsequently died from suspected Parvovirus.”

All of the dogs and puppies we seized received immediate veterinary treatment following the seizure by Police, which included all their vaccinations, in an attempt to prevent further suffering to the animals.

Police also explained that a jack russell terrier that had been seized is expecting a litter of pups.

Police addressed the public; “On a final note please be assured our investigation continues and continues to grow as a result of information coming from you. We would encourage you to continue to report if you have been a victim of this crime. We want to hear from you and could not have actioned this investigation had it not been for your information and interest in this.”