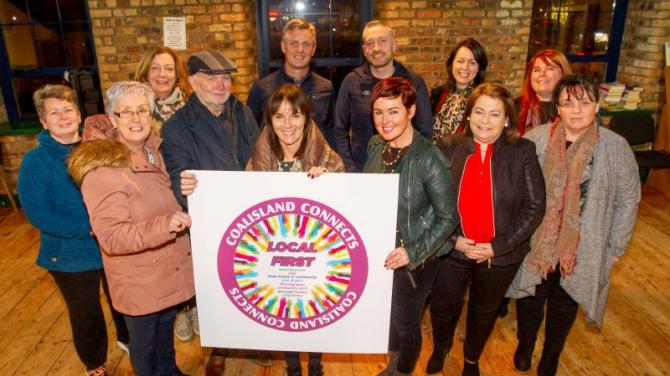 THE traders of Coalisland have united in an effort to support their community and at the same time encourage residents to shop local.

More than 20 traders in the town came together last week to form the ‘Coalisland Connects’ initiative.

In the participating stores, which will be indicated by a sticker on the door, a percentage of money spent on purchases will be donated to a specified charity or community group, with a cheque presented to the group at the end of each month.

The first recipient will be Friends 2 Talk, a locally based mental health charity.

One of the traders in the town who is part of the scheme is Connor Lowe of Frank McGirr’s Menswear, based in The Square.

And he told the Courier that the original idea from the scheme came from his wife, Wendy.

He said: “My wife is in the ladieswear division here and she wanted to help a local mental health charity group coming up to Christmas.

“So say if you buy an item, for, perhaps, over £20, then a portion of that would go to a donation box and be donated in the week leading up to Christmas.”

And Connor says his wife has already received trade simply because she had promoted the initiative online.

“It’s a scheme that was pioneered by the traders with the hope of it being supported by the local community in Coalisland,” says Connor.

“The vision is to highlight the benefits to our customers of thinking, ‘local first’.

“By then donating some of our proceeds to different groups that will then benefit the whole community.

“If the message of local first is embraced then the benefits of this will be unlimited.”

A wide variety of businesses have already committed to Coalisland Connects, from barbers to cafes, the Credit Union and various other retailers.

Connor concludes: “We just really hope the community gets behind this and that we will be able to see real benefits come to the whole town because of Coalisland Connects.”