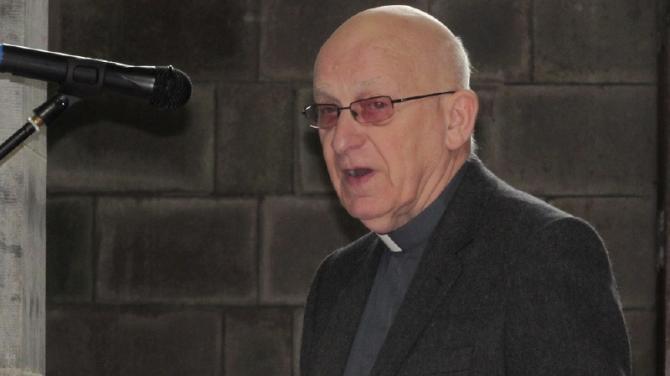 MOURNERS from far and wide gathered in Sligo at the weekend to pay their respects to the former Rector of Drumglass Parish Church, Canon Derick Swann.

He is survived by his wife Irene, children Fiona and David, their spouses Stephen and Marina, and grandchildren Andrew, James, Lara and Sophie, to whom sincere sympathy is extended.

The service was conducted by the Bishop of Tuam, Killala and Achonry, the Rt Rev Patrick W. Rooke.

During the sermon, the Bishop told how Canon Swann spent 50 years in ordained ministry and said “death is not the end, but merely a comma on the road of life”.

The Bishop said: “Faith and loyalty to the Church of Ireland was at the heart of who Derick was. He loved serving God as a priest of the Church and was utterly conscientious in his work.

“He was one of those priests who didn’t really believe in retirement.”

Reflecting on a life well lived, Bishop Rooke told how Canon Swann, along with his brother Edgar, grew up in North Belfast.

His wife Irene lived a short distance away and they were married in St John’s, Whitehouse in 1963.

On finishing school, Canon Swann worked in industry for a few years before a call to the ordained ministry proved his true vocation.

”What a superb and popular priest he was,” said Bishop Rooke.

”Organised, efficient, pastoral, worldly wise, reliable, thorough. He was very much the traditional Church of Ireland rector – straight down the line, no nonsense, no frills.

“Not only  was he recognised as a first rate parish clergyman, but also as a trainer of curates and many parishes throughout Ireland are now benefiting as a result of that thoroughness and common sense Derick instilled in those who were his colleagues.”

Aside from his faith, Canon Swann found great joy and comfort in his family, mourners were told.

As a couple, he and wife Irene were seldom apart and he could always count on her for constant support.

His children and grandchildren shared an equally special place in his heart. He took such pride in their achievements and loved nothing more than to be surrounded by them.

Addressing Canon Swann’s family, Bishop Rooke said: “He was so proud of you all and what joy he and Irene have had in retirement in having family nearby and family to stay.