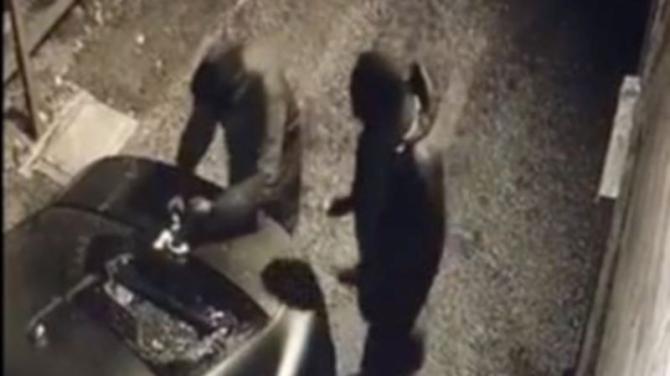 POLICE have launched an investigation after shocking CCTV footage captured two masked man carrying out an arson attack at a property in Tobermore over the weekend.

The video shows two balaclava-wearing men jumping out of a Volkswagen Passat before approaching the property in the Hazel Grove area of the village between 1:00am – 1:15am on Saturday morning.

One of the men is seen smashing up the rear window of an Audi with an axe-like weapon as the co-conspirator pours two bottles of flammable liquid inside the vehicle.

As one of the males appears to try and light a cloth on top of the vehicle’s boot, the other proceeds to make his way around the victim’s house smashing in windows with the weapon.

The two men then appear to leave the scene before footage shows them returning to the Audi a matter of seconds later.

One of the males is seen lighting the doused cloth at the rear of the vehicle, which results in the Audi becoming engulfed in flames.

CCTV shows the two men sprinting from the scene before climbing into the passenger seats of a Volkswagen Passat waiting outside the front of the property.

Police confirmed the getaway car was later discovered burnt out on the Lisnamuck Road.

Upperlands Football Club, where the victim is understood be a member, have appealed for anyone with information of the “random” attack to come forward.

“We are appealing for information following a random attack on one of our esteem and well respected member in the early hours of Saturday morning on 16/11/2019,” a club spokesperson said.

PSNI confirmed enquires are ongoing and echoed the football club's plea for help.

“The two men are described as wearing dark clothing and balaclavas. The men are believed to have made off in a VW Passat following the incident,” said Sergeant Young.

“Enquiries are continuing and we were appealing for information in relation to this incident to contact police on 101, quoting reference number 92 16/11/19 or call Crimestoppers.” The full CCTV footage of the incident can be viewed on the Courier’s social media channel: www.facebook.com/tyrone.
courier .