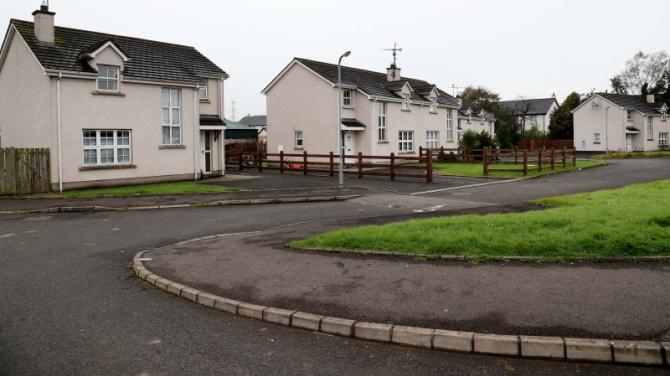 COALISLAND’S School Gardens has became the first residential area in Mid-Ulster to see just one person express an interest either way in Irish language signage being installed in their estate.

Surveys of residents on whether or not to introduce Irish first signs in their area have typically produced very low response rates.

But School Gardens has surpassed all previous low responses as just one of the nine residents expressed a desire to see the signs introduced.

None of the other eight responded but, due to Mid-Ulster Council’s rules, the signs will still be erected.

That is because the Council does not require a majority of residents indicating their support for the introduction of the signs, but rather only a majority of those who respond.

As the one person who did opt to respond indicated their support for the proposal, the signs will be put in place.

Given the only requirement to trigger a survey is that a single resident of the area lodges a letter with Mid-Ulster Council asking that they do so, it is highly likely the lone individual who supported the proposal was also the one who made it.

The signs heading towards School Gardens are part of a wider shipment going in the general direction of Coalisland as 14 of the 17 residential areas which received approval at the most recent meeting of the Council’s Environment Committee are in the vicinity of the town.

The other two areas receiving approval in Coalisland saw a few raise objections, but 10 of 56 residents in Canal Meadows were in support, with one against and three responses deemed invalid, giving an approval rating by the Council metric, of 91 per cent.

Just 81 of the 291 residents on the Mountjoy Road replied, with 75 in favour, five opposed and one response deemed invalid, giving an approval rating of 94 per cent.

Another area with an incredibly low level of response was Mourne View in Stewartstown, where just three of the 42 residents replied to the Council survey, a response rate even lower than at School Gardens, as just seven per cent of the people living there replied. The three who did reply were in favour and the signs will duly be erected.

There was a higher level of repsonse at Kindrum in Dungannon, with 39 of 64 residents replying to the survey. Of those, 37 were in favour and two responses were deemed invalid, meaning Mid-Ulster Council measures that as  100 per cent support.

Glebe Crescent saw 35 letters issued, with 17 returned. Of those, 15 were in favour and two against, meaning the signs will be erected with 88 per cent support from those who responded.

One Irish language sign proposal was rejected, however, at Donaghendry Road, Stewartstown.

Indeed, it received the lowest level of support from respondents of any area yet, as just 22 per cent of those who replied to the survey indicated their approval of the plan.

There was a much higher uptake on the survey than in almost all other places since the surveys were introduced with 28 of 34 residents replying, or 82 per cent.

Of the 28 responses, 22 were opposed and just six in favour, meaning signs will not be introduced there.

A further eight Irish signage applications have now been lodged with Mid-Ulster Council.

They are at Jockey Lane in Moy, Mawillian Road and Ballygruby Road (both Moneymore), Killycanavan Road in Ardboe, Aghareany Road in Donaghmore and at three addresses in Castlecaulfield, Annaghmakeown Road, Frenchmans Lane and Ferny Ridge.

As has been the case on several occasions in the past, several applications lodged with the Council have been to the exact same templates, as is the case with the three in Castlecaulfield and the one in Donaghmore, while the Mawillian Road and Ballygruby Road applications have also been filled into the same template as eachother.

Residents in all of those areas will now be canvassed by Mid-Ulster Council for their opinion on the proposal.