Landmark Dungannon hotel back on the market 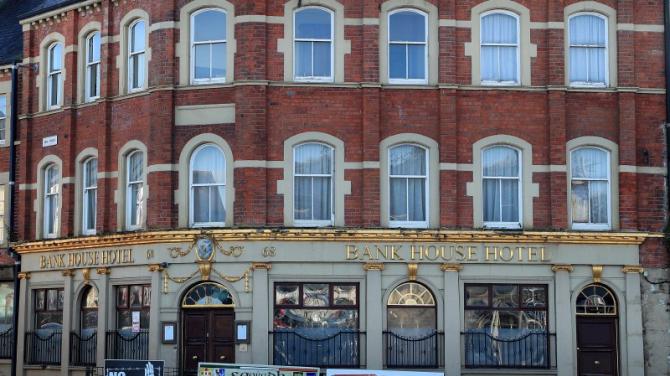 A DUNGANNON hotel has been placed back on the market, seven years after it previously failed to sell for £115,000 less.

The Bank House Hotel, a listed building on Irish Street, is currently open to offers of £615,000 and above.

The hotel, which was renovated and extended from the former Allied Irish Bank building in 2007 at the height of the property boom, was previously listed for sale in October 2012 for £500,000 after its closure in January of that year.

The hotel has 17 en suite bedrooms, bar and lounge, function rooms, kitchen and on-site laundry quarters, as well as a roof terrace and smoking area.

Despite lain dormant since its closure, the agents selling the property believe, due to the demand in Dungannon, it has the potential to reopen as a hotel or B&B.

“Although the hotel has been closed now for several years it has been maintained throughout and remains in good condition inside and out,” said a Square Real Estate agent.

“This offers a viable opportunity to be reopened as a hotel or even simply a B&B, as rooms are in high demand in the Dungannon area especially with many large businesses based in the local area.”

The building was first constructed as a private residence in 1897. Over the years the building has housed a wine and spirit merchant and three different banks before its transformation into the Bank House Hotel.

During the renovation work many of the features from each of the landmark building’s transitions, from private home, to business premises, to bank were retained.

A recent report found that more than £1bn has been invested in the Northern Ireland hotel market in the last 20 years, with the number of bedrooms doubling in that time.

Despite the boom in accommodation sales across the province in recent years, The Bank House remains the last hotel to have been open in Dungannon.

Back in June last year, developers Moorfield Group set out proposals at a Mid-Ulster Council meeting to return the hotel industry back to the town as part of a £10m transformation of a derelict site on Ann Street.

It is hoped the site, which sits opposite the Bank House Hotel and has lain vacant for three decades, will be transformed into a mixed-use development including a hotel, retail units, car parking and a public realm scheme.

However, over 16 months later, there has been little to no movement on the proposal which would see around 80 construction jobs and 120 full time equivalent jobs, once the hotel and retail units are operational, arrive in Dungannon.