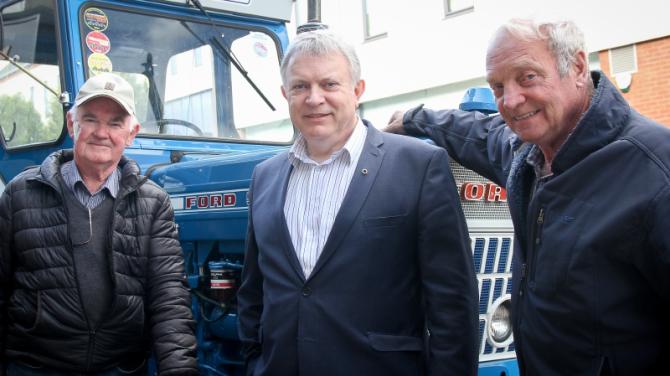 BREXIT, which is looming with just weeks to go, presents a real and present danger to Northern Ireland’s dairy sector including farmers throughout Tyrone and Mid-Ulster, warns a local MLA.

SDLP MLA for Mid-Ulster, Patsy McGlone, said that the British Government must address the concerns of dairy farmers and processors in the north.

Mr McGlone told the Courier: “Our local economy remains highly dependent on the sustainability of our agri-food sector. The future arrangements within the UK, on the island of Ireland, and with the rest of Europe will be essential to securing its continued success.

“The warning from the Dairy Council for NI that a no-deal Brexit would be devastating for the local dairy industry, farming families, rural communities and our economy should come as no surprise. It has been pointed out consistently, by the SDLP and others, that such a scenario would be a disaster for the agri-food sector here.”

Continued the agriculture spokesperson: “The positioning by the current British Government and its enablers in the DUP means that a no-deal Brexit remains a real and present danger to the NI dairy sector.

“Any imposition of tariffs and non-tariff barriers to trade on the island of Ireland would threaten the jobs and livelihoods of more than 3,000 farm families across the north.

“Neither the British Government nor the DUP can bury their heads in the sand and ignore these concerns any longer.

“They will be directly responsible for the economic chaos that will follow a no-deal Brexit.”

The Ulster Farmers’ Union, in a statement to the Courier, reiterated that a no-deal Brexit would be the worst possible outcome for Northern Ireland dairying.

He was responding to the Dairy Council for Northern Ireland’s analysis which suggests that farmers could lose 10 pence per litre should the proposed tariffs be imposed.

Deputy president Victor Chestnutt said: “Any agreement that restricts trade north-south and east-west will have a severe impact on Northern Ireland dairy businesses.

“We have consistently said that any deal must allow free and frictionless trade and that a no-deal Brexit would be disastrous for Northern Ireland’s family-run farms.”

“It would be totally unsustainable for our members and the entire Northern Ireland dairy industry if these tariffs were put in place. Our farmers who are the primary producers, will pay the price for high tariffs ultimately wiping out their livelihoods.

“Any tariffs the EU applies should be reciprocated. The UK should apply tariffs, which includes goods coming into Northern Ireland from the Republic of Ireland.

“We will continue to lobby Government on behalf of our farming families and hope that a no-deal Brexit will be avoided.

“The Prime Minister’s proposals are a starting point, it addresses some concerns but not others, specifically around tariffs and customs.

“We need a deal which allows the UK to leave the EU in a managed way so that trade in every direction can occur (north-south and east-west) with minimal disruption and specifically, a resolution that address tariffs between Northern Ireland and the Republic of Ireland,” concluded the Ulster Farmers’ Union’s Deputy President.