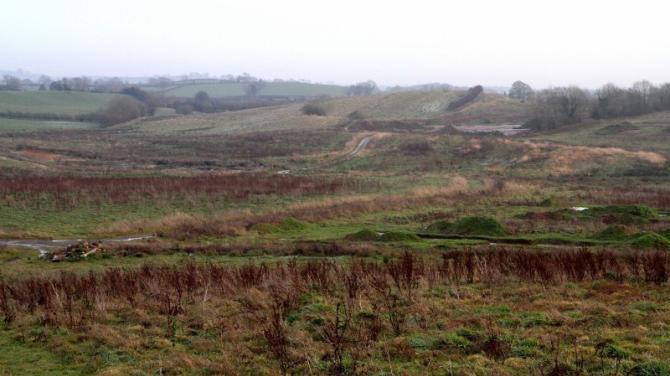 WEEKS after the official opening of a new £45million Fire Training Facility at Desertcreat, plans are being finalised for the sale of the remainder of the site, initially earmarked as a Police, Prison and Fire training facility.

Earlier last month Phase One of the Fire Service Training College was officially opened on a 67-acre site at Desertcreat, which leaves 143 acres of surplus land which was due to house a joint Police, Prison Service and Fire training facility.

The Courier can report that the Policing Board, which owns the Desertcreat estate between Cookstown and Dungannon, is now in the final throes of disposing of the surplus land to a “public sector body” and the transfer is expected to be concluded over the coming months.

The remainder of the deserted land was due to be sold late last year, however the Policing Board said the sale of the land is now at “an advanced stage”.

A spokesperson told the Courier: “The sale of the land did not conclude as advised in October 2018.

“Ongoing procurement procedures, with a public sector body, are at an advanced stage and it is hopeful that a transfer of this land will be concluded later this year or early next year.”

The Board spokesperson confirmed to the Courier the interested party was the same public sector body that had expressed interest late last year and that the sale will involve the remaining 143 acres of land.

The opening of a Fire College last month – albeit the first phase - marked a milestone for the Desertcreat training facility after a saga of delays, cancellations and, finally, cuts.

The massive site had been initially designated for a NI Community Safety College, to provide training for new Police recruits, Prison Service and Fire Training personnel. At one point there was even talk of an Ambulance Training Centre on the site.

The Fire Training Facility occupies 67 acres of the 210 acre site with the remaining 143 acres at Desertcreat deserted.

Originally unveiled in 2004 as a Policing College and later to include the Fire Service and Prison Service, the Northern Ireland Community Safety College at Desertcreat was estimated to cost £80million with a 2008 completion date.

But after costs spiralled to £157million, the plan was abandoned amid reports that Police chiefs had security concerns over the location. And with it went £12million of taxpayers' money.

The initial Training College for the three emergency services would have been one of the largest ever construction projects delivered in Northern Ireland in recent times, creating a multi world class centre of excellence. It was even rumoured that the FBI were interested in using the proposed Desercreat facility.

The Community Safety College would have provided more than 2,000 jobs in Mid-Ulster through the building and operation of the Training College, bringing much-needed investment to the area.

However the project encountered delay after delay over the next decade.

In January 2013 planning permission was granted, but by March the costs had spiralled, reportedly due to alleged "incompetence".

Then, in November 2014 the steering group halted the plan, citing concerns about the financial environment and contended it "would not be prudent to press ahead".

In March 2015, it was announced that the Programme Team responsible for the Community Safety College had conducted a review and concluded that it was no longer economically viable to locate at Desertcreat.

By that time costs for the Community Safety College had spiralled to £157million .

They also stated the three services (Police, Fire & Rescue and Prison Services) earmarked to use it no longer needed the number of training days that were forecast. There were also reports that Police chiefs had security concerns over the location.

In June 2015, it was announced that £53million of public money had been withdrawn by the Treasury and the writing was on the wall.

On 27th October 2015, it was revealed that a "draft business case" had been produced indicating that training for each of the three services would be split across three different sites.

The Fire and Rescue Service only would locate to a £44million purpose-built complex at the Desertcreat site, with separate training facilities being upgraded for the Police at Garnerville, Steeple and Enniskillen, new prison training facilities at Maghaberry and refurbishment at Magilligan at a total cost of £100million.

A Board spokesperson told this newspaper last October: “The remainder of the site, having been declared surplus, is currently the subject of a disposal being managed by the Department of Finance – Land and Property Services, Central Advisory Unit, under established procedures within the ‘Disposal of Surplus Public Sector Property In Northern Ireland, March 2013’ guidelines.”

The Board would not comment further on the future owners of the land other than to say it is a public sector body.

While news of the vacant site's sale is welcomed, questions still remain – what will the land be used for; how will it affect neighbouring farms and residents and how much investment and employment will it bring.