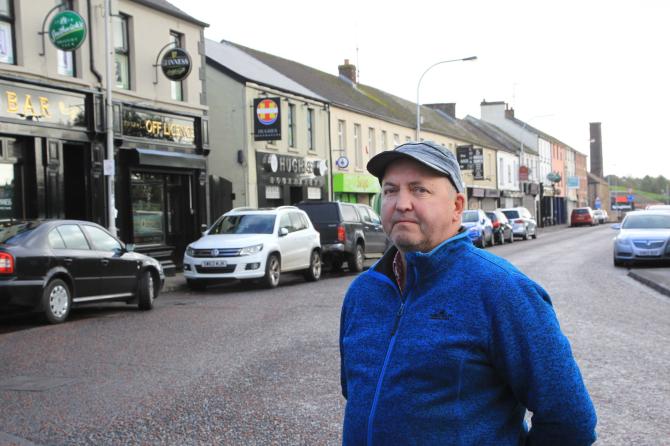 Coalisland Traders' Association Secretary Raymond O'Neill is a vocal critic of the plans to introduce a one way street through the entire length of Main Street.

TRADERS on Coalisland’s Main Street have voiced their strong opposition to Mid-Ulster Council’s plan to introduce a one way system along the street.

The move is part of a wider £3.4 million public realm works in the town, but it has been met with concern by traders along the street.

Such has been the fears over the potential impact of the scheme, traders have launched a ‘Save Our Main Street’ campaign, which the Courier reported on exclusively last week.

Issues over parking, loading bay access, traffic congestion and loss of trade are all at the foremost of traders’ minds.

The Courier spoke to numerous traders on the Main Street, with every one expressing their deep reservations about the plans.

“I’m totally against it,” says Kevin Donaghy of Uncle Sam’s, a popular takeaway on the Main Street.

“It’ll just make a big bottleneck and put people off.

“It means as well that anyone coming from Stewartstown, Clonoe, Annagher have to come past six eating places to get to me.

Similarly pessimistic is a representative of The Ceili House, a pub which was only opened in the town 18 months ago.

They said: “It’s going to hurt us. How are you going to get lorries down here if it’s all one way? Even when they put the pipes down at the start of the year and the street went one way we had no business for three weeks.

“It could prove to be very damaging because you know the way the pub business is and we don’t need something like this.”

Sinead Duffy of Boyz 2 Men hairdressers, is a long established trader on the Main Street, and, like other business owners, is pleased the town will see investment, but disagrees with this aspect of the work.

“I’m happy for them to spend a bit of money to freshen the town up,” says Sinead, “but to narrow this street to one way doesn’t make sense. It means if you want to come to me you have to come the whole way round the town.

Sinn Fein MP for the area Francie Molloy has also previously voiced his support for the venture and stated that, if the one way system is a failure, it could be reversed.