RESIDENTS OPPOSED TO LISSAN MINE PLAN 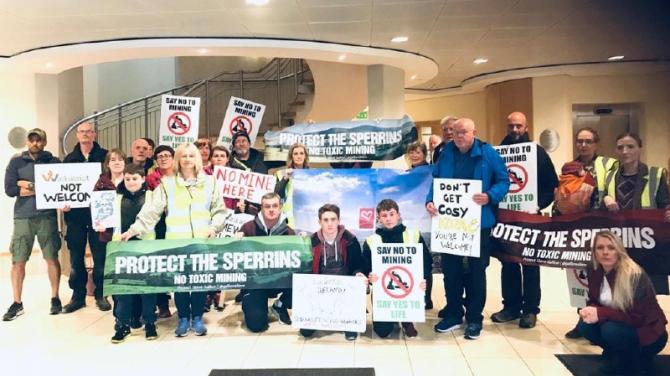 RESIDENTS of Lissan, outside Cookstown, are holding a special public meeting tonight, Tuesday, to oppose plans to mine for gold in the area.

Over the past year, Australian Mining Company Walkabout Resources and its subsidiary, Belfast-based Shackleton Resources, has been keen to prospect for deposits of gold in the Slieve Gallion area of the Sperrin Mountains, which takes in the Lissan, Moneymore, Draperstown and Desertmartin areas.

Sampling work has already been carried out, including aerial surveys and soil samples being taken in the hope of locating gold deposits.

Both Walkabout and Shackleton Resources have now identified targets for drilling and an application has been submitted by Shackleton to Mid-Ulster Council for test boreholes in the townland of Feegarron, Lissan – the first such application in Mid-Ulster.

It is understood Shackleton Resources proposes to develop 12 bore holes for the drilling of precious base minerals in the townland of Feegarron.

The matter was discussed last month when the application from Shackleton Resources came before Mid-Ulster District Council.

Locals only learned of the meeting through social media and attended the meeting in Magherafelt to lobby councillors.

The application was refused by Mid-Ulster District Council, however the Department for Infrastructure can overturn the refusal and has until today, Tuesday 1st October, to make a decision.

A spokesperson for the DFI, when contacted by the Courier, said: “The local council, in its role as local planning authority, has issued a direction removing permitted development (PD) rights for the proposed development.

“While the direction is in place, the developer cannot avail of PD rights.