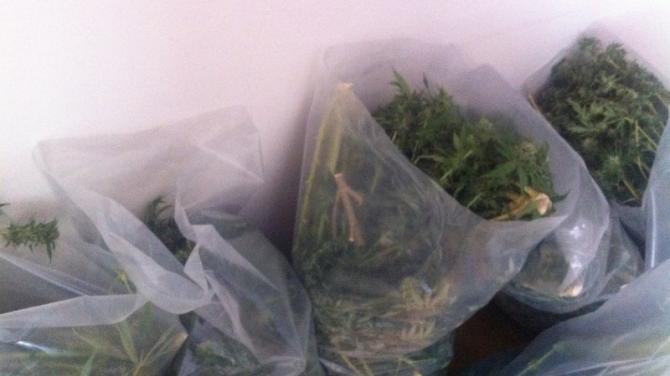 POLICE have seized approximately £50,000 worth of drugs after discovering a “sophisticated” major Cannabis factory in two Sixmilecross houses owned by the Orange Order.

The operation was discovered inside two adjacent properties on the Main Street area of the village around 7.30pm on Friday night.

It is understood that senior officials from the Sixmilecross LOL 406 alerted PSNI to the criminal activity after local residents became suspicious that blinds in the houses had been closed for substantial periods of time.

Forensic officers spent most of Saturday investigating the scene as around 200 bags of Cannabis plants, electrical equipment, a complex water system and other production devices were removed during a 24 hour clean-up operation at the rental properties which the lodge purchased a number of years ago.

Representatives of Northern Ireland Electricity (NIE) were also present to disconnect the extensive electronic equipment in place. Police confirmed NIE had to switch the electricity off due to concerns about the safety of their engineers, such was the risk of shock or fire due to the number of lamps, fans and heaters that were running inside.

Worshipful Master of the Lodge, King Anderson confirmed the circumstances surrounding the drug factory discovered at their properties.

“Officials from Sixmilecross LOL 406 alerted the PSNI to suspected criminal activity at two properties at Main Street in Sixmilecross,” he said.

“The lodge officials worked with the PSNI and will leave this matter in their hands for further investigation.”

The PSNI thanked the members of the community for the tip-off to the extensive Cannabis factory.

“We seized plants with the estimated value in the region of £50,000 and have dismantled a sophisticated growing operation which was spread across two houses in the centre of the town,” said Sergeant Johnny Hamill.

"I would like to thank the member of the local community who came forward and made us aware of their concerns about these properties.”

He added: “We will continue to do everything possible to prevent the supply of drugs and identify those involved while at the same time, make people aware of the real danger posed to their health and their lives by illegal drugs.

“I would appeal to anyone who is aware of any information about the supply of drugs to contact local Police on 101, so we can work together to do something about it.”