From Seville to Stewartstown for Spanish student 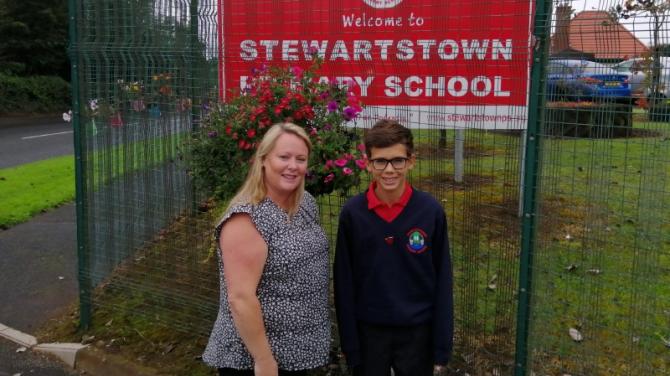 STEWARTSTOWN Primary School is brimming with pride as it opened its doors to welcome a pupil from Seville in Spain.

Young Pablo Porres, who is only 12 years of age, has chosen to attend Stewartstown Primary in order to gain a personal insight into school life and culture in Northern Ireland. His parents remain in Seville whilst he resides with a local Stewartstown host family.

It is a brave step to take, leaving your family behind at such a young age, but one which Pablo and his family feel will benefit him for life.

Pablo’s father had the opportunity to attend university in Northern Ireland many years ago, and thoroughly enjoyed his time, embracing the local culture and values, treasuring his experience for life.

His dream was that his son got to experience life in Northern Ireland as he did, learning and valuing different cultures and beliefs.

Now that dream is reality, thanks to Stewartstown Primary School.

Pablo and his family met with the school’s principal Ms Kendra Bolton and the chair of the Board of Governors Mrs Sandra Dougherty, in April.

They were most impressed with the standard of education on offer in the small, rural school and soon put the wheels in motion.

Pablo has been placed within the P7 class, where the local pupils have warmly welcomed him. Being a keen football player, his shared interest with his fellow peers has been a great hit!

Ms Bolton commented on how well he has settled into school life in Stewartstown Primary.

She said: “Pablo is a lovely lad, who has settled into school extremely well. He is a big hit with his classmates, teaching them all about life in Spain and how to speak Spanish.

“We have so much to offer Pablo, and vice versa. Learning together and embracing each other’s cultural differences teaches our pupils mutual respect and understanding. We are delighted to have the opportunity to be his host school for his time here in Northern Ireland.”