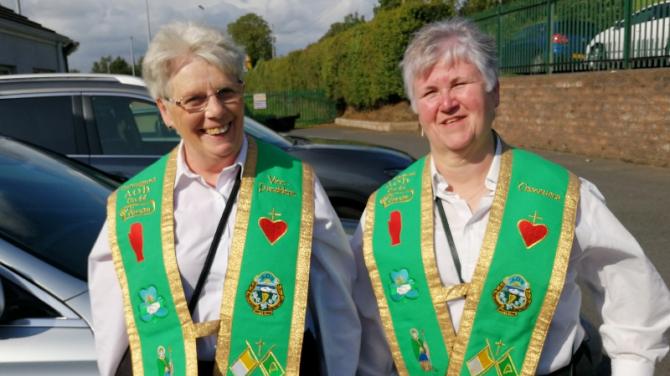 THE first Feast of the Assumption AOH National Parade in over 80 years was hosted by Aghaloo Ancient Order of Hibernians on Sunday 18th August 2019 in Aughnacloy, Co.Tyrone.

14 bands and Divisions from all over Ireland and Scotland representing over 50 Divisions walked from Aghaloo O'Neills GAA Grounds on the Monaghan Road up around Aughnacloy Main Street, Moore Street and back again to Aghaloo Gaelic grounds as everyone enjoyed the glorious weather.

People lined both sides of the street in Aughnacloy applauding and thoroughly enjoying the fantastic music from the 14 bands.

Speeches were made from the platform by Ancient Order of Hibernians Board of Erin, Vice President Bro Liam McCarthy (Cork AOH), Tyrone AOH President Bro Frank Gildernew, with McMartin McCarron assisting in the ordering of band positions.

Thanks to the traders in Aughnacloy and those who sponsored the event. Last but not least a big thank you to Aghaloo O'Neill’s Gaelic Football Club for the use of their premises and facilities and to all the stewarts, Order of Malta and everyone who helped make this one of the biggest and best parades seen in Co Tyrone in a long time.