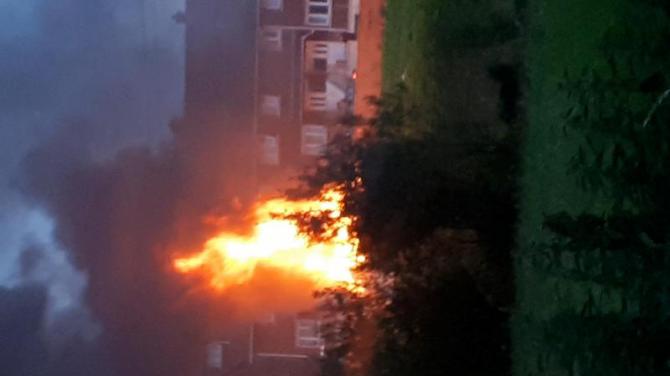 MID-ULSTER Sinn Féin councillors have condemned the “hate-fuelled”
burning of Union Jack flags on a Republican bonfire in Dungannon on Thursday.

Tyres and other toxic materials were set alight alongside unionist symbols at the anti-interment bonfire on the Ballygawley Road.

Torrent councillor Ronan McGinley spoke out against the scenes of sectarianism and hate crime on show and said “hate-fuelled” bonfires should be a thing of the past.

“It doesn’t matter what community you come from, burning effigies and flags that people value is wrong,” he said.

“Mocking the dead is wrong. Incitement and hatred is wrong and people should not be afraid to call it what it is. The scenes we have witnessed across the North in recent days, weeks and months do not represent the society we have worked hard to achieve. People are sick of these hate-fuelled displays. It does not matter what side of the community you ‘claim’ to be from, it needs to end.

“At the last meeting of the Mid-Ulster District Council, I said ‘this type of behaviour is not a celebration of culture, it is a sectarian display of hate’. I stand over that statement but would add - it does not matter if it is July, August or October - it’s wrong! Hate crime should not be tolerated in today’s society at any time of the year.”

Dungannon representative Dominic Molloy echoed the thoughts of his party colleague and called out those involved in the incident.

“To those who think this advances any cause, I urge you to think again. Burning toxic material to be inhaled by local residents is to be rightly condemned,” he added.

“Do you really want to be a mirror image of the thuggery and disrespect witnessed on the 11th of July?”

He continued: “Sinn Fein demand that the Irish Tricolour is treated with the respect it commands, therefore the burning of union flags and symbols which other communities value must also be called out as wrong.

“I call on those interested in alternatives to marking the Internment Anniversary to engage with us locally and get involved in progressing and revitalising our community.”

“There appears to be silence from Nationalist, elected representatives and also Mid-Ulster District Council when it comes to the Republican bonfire in Dungannon on Thursday night,” he commented.

“Tyres and other toxic materials were burned. Yet, in July when strictly only pallets were burned on bonfires there was an enormous outcry. This was evident at the recent meeting of Council. Union flags were also burnt on Thursday in this sectarian, hate-filled event. Unionist people rightly believe that there appears to be one rule for one group and not for the other.”

Responding to the “silence” comments made by Unionists, Cllr McGinley said: “The accusations by some are both farcical and hypocritical. I can’t be clearer in what I’ve said. I condemn these behaviours unequivocally. However it’s farcical for the DUP and UUP in Mid-Ulster to call on others to condemn these actions when they sat in the chamber of Mid-Ulster Council last month with their head in the sand, afraid to call out anti-social, sectarian elements of the unionist community who engaged in exactly the same actions.

“They were silent. I believe we need to move to an effective framework which will enable cultural expression to take place in a legal, respectful and safe manner, we also need political leadership within Unionism to call out hate crime every time it shows its ugly head, not just when it’s an opportunity to try and score cheap political points.”