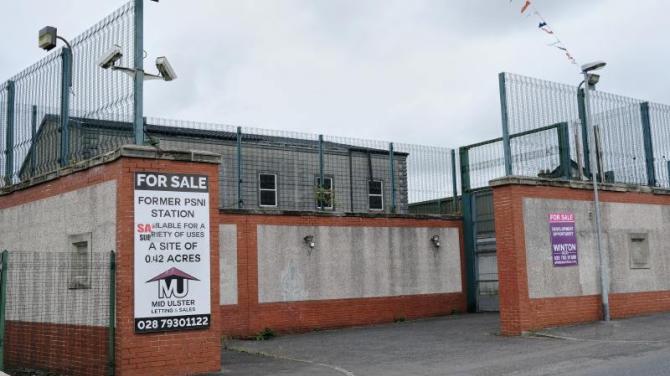 THE former Coagh Police station which has lain derelict for over a decade has been listed for sale once again.

The disused site, which occupies a prominent position on the village’s Main Street, has long been earmarked as a significant development opportunity, however nothing has materialised since PSNI closed its doors in January 2007.

Any potential sale of the 0.49 acres station will include the main building, modern detached garages and outbuildings, which extends the site to 5,049 sq ft.

An asking price of £120,000 has been set for the property and it has been advertised for both residential and commercial purposes.

In August 2009, the Policing Board announced Coagh would be amongst 26 police stations across Northern Ireland which would be sold as part of their planned cost-saving measures.

But eight years on, the site remains vacant and one local resident told the Courier they are relieved it may finally be redeveloped as it is a “sight for sore eyes”.

“It has been sitting disused for ages and it just makes the village look run down – it’s even worse that it is right in the middle of the community,” he said.

“There has been rumours of hotels, houses and the like replacing it for years, but nothing has ever happened.

“We [the community] are proud of our wee village and work hard to keep it clean and tidy, but derelict buildings are an eye sore.”

He added: “We all just hope a buyer comes in and transforms the site into something which benefits the community.”

It is understood the former police station’s vendor may also consider leasing the property.

Two-thirds of all police stations in Northern Ireland have shut within two decades. It was part of the PSNI’s 'normalisation' of security across the province after inheriting 140 stations from the RUC back in 2001.