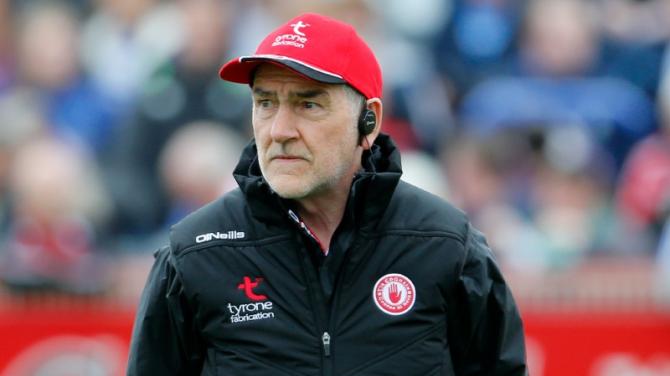 TYRONE senior football manager Mickey Harte last night apologised after a video emerged of some players singing a rebel song as a band parade in Aughnacloy passed their bus.

The team was returning from a win over Cavan in Clones, County Monaghan on Saturday, and can be heard singing the song “Come Out Ye Black And Tans”.

The annual parade in Aughnacloy is organised to avoid disruption to mass-goers.

DUP leader Arlene Foster said the singing did not represent many who supported the GAA.

The parade, organised by Lisgenny Flute Band, takes place after 20:30 BST, to avoid disruption to mass-goers.

The video was taken as the bus had stopped in Aughnacloy.

It appears that someone on the bus shouts a sectarian phrase relating to Protestants.

In a statement Mr Harte apologised to “anyone who has been offended by the unacceptable behaviour of some of the panel on Saturday evening”.

“The matter is being dealt with in-house and we won't be making any further comment,” he added.

Deputy Chair of Mid Ulster District Council Clement Cuthbertson said: “This is disgraceful behaviour and must be condemned. The clip also shows this behaviour was aimed towards women and children taking part in a band parade. The GAA receive substantial grant funding from Mid-Ulster Council, but yet behave in this manner.”