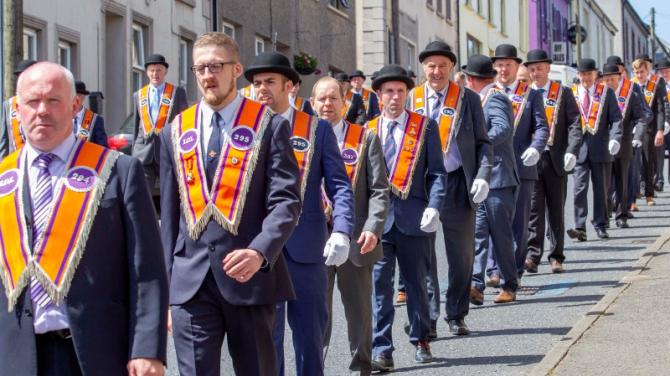 THOUSANDS will converge on the villages of Pomeroy, Augher and Ballyronan this Friday for the traditional Twelfth celebrations with local Districts putting the finishing touches as they prepare to welcome Orangemen and Sisters, bands and spectators for the highlight of the marching season.

Around 15,000 Orange Brethren and Sisters will on parade at the three local venues accompanied by over 130 bands for a spectacle of colour and pageantry.

THE highest village in Northern Ireland will host the largest Twelfth parade in County Tyrone for the first time in seven years.

Orangemen from the Districts of Killyman, Stewartstown, Cookstown, Castlecaulfield, Coagh and Benburb will join with the host District, Pomeroy with upwards of 70 lodges and 50 bands expected.

The main parade will move off at 12.15pm from the Assembly point on the Tandragee Road and will proceed towards Pomeroy before turning into Station Road to the Demonstration Field.  Taking pride of place in front of Pomeroy District will be a new Bannerette bearing the names of the murdered Brethren of Pomeroy District.

This will be a lasting tribute to eight members who paid the supreme sacrifice in defending Northern Ireland from terrorism and will also ensure that they will not be forgotten.

THE south Tyrone village of Augher will host a Twelfth parade for the first time since 2013.

The organisers of this demonstration pride themselves on hosting what is very much a family centred event which sees many people from across the province and beyond, returning to their home area for the 'Big Day'.

The Parade will assemble on the Aughnacloy Road with a start time of 12.15pm and will proceed via Main Street to the demonstration field on the Clogher Road. The parade will be led by the District Officers of Annahoe and Fivemiletown with a special welcome once again extended to visiting Brethren from Trough District in County Monaghan.

Twenty bands will accompany the Orangemen - many of which will have three generations of the same family on parade.

At the Demonstration Field, the religious service at 2.15pm will be preceded by a joint performance by Murley Silver & Glenageeragh Pipe Bands.

In the Demonstration Field, Orangemen are also planning to capture some of the atmosphere of the upcoming British Open Golf Championship, with their very own Orange Golf Open which will see various members competing in a nearest the pin competition.

The organisers are also hosting a series of events in the days leading up to the Twelfth which began on Saturday 6th with a Twelfth breakfast in Corick House.

Monday 8th - Wednesday 10th will see a 3-day Soccer school hosted in conjunction with Glasgow Rangers at the Roughan 3G sports pitch and at Fivemiletown College.

There will also be traditional Eleventh Night Celebrations at Roughan with a family fun night and Bonfire.

LARGE crowds are expected to converge on the village of Ballyronan, on the shores of Lough Neagh for the South Londonderry demonstration.

The Twelfth was last held in Ballyronan in 2011.

There will be a total of eight Districts on parade – Ballyronan, Garvagh, Castledawson, Magherafelt, Kilrea, Tamlaght O’Crilly, Moneymore and Tobermore.

All Districts will form up in the Assembly Field on the Shore Road (Toomebridge Side) and parade through the village via Shore Road, Main Street and Ballyneill Road to the demonstration field.

Local Lodge Lisnamorrw LOL 480 will also have a new banner on display, having only being dedicated a couple of weeks before the Twelfth.  If we are blessed with favourable weather, then several Lambeg Drums will be providing their own form of music during the day.

‘The Demonstration Field’ will have the usual stalls of food, ice cream, red, white & blue items plus children’s activities.

Platform proceedings are due to get underway at 2pm and will be chaired by County Londonderry Deputy Grand Master, James Evans.

The Religious Service will be led by the Rev Nigel Kane, Deputy County Grand Chaplain.

Most Wor Bro Edward Stevenson, the Grand Master of the Grand Orange Lodge of Ireland, will be the guest speaker.

The Return parade is due to commence at 3.30pm.

The field and street collection will be in aid of Ballyronan District Funds and Air Ambulance NI.

Don’t miss full reports and photos from the Twelfth in the villages of Pomeroy, Augher and Ballyronan in next week’s Tyrone Courier and Mid-Ulster Courier, out Tuesday 16th July.