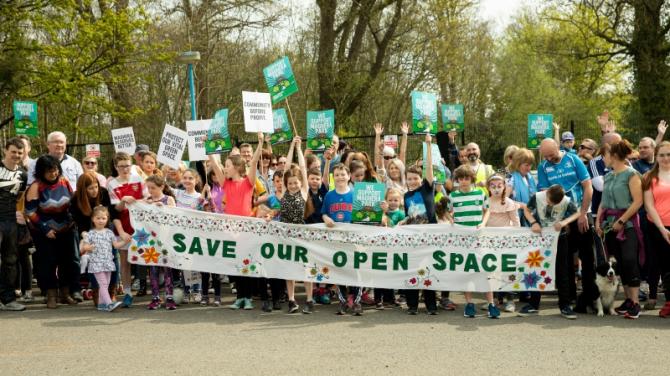 AN OPPOSITION group to the controversial Maghera Business Park have launched a legal bid against Mid-Ulster District Council’s proposals.

The Council earmarked the former Maghera High School site on the Tobermore Road as an ideal location to build an enterprise centre, however there has been widespread community disapproval to the plans.

A community-led campaign was started by Maghera Park Action Group (MPAG) to transform the 20-acre vacant site into a public park and – at the time of going to press – there had been 1,334 letters of objection submitted to the Council’s plans, while no letters of support have been received.

The Council originally submitted a ‘Proposal of Application Notice' (PAN) back in June last year, signalling its intention to apply for full planning permission to potentially create up to eight serviced sites at the former High School location, with qualifying businesses constructing their own purpose-built facilities ranging in size from 4,000 sq ft to 20,000 sq ft.

They have since entered a full planning application following the completion of the PAN process, which included a 12-week period of community consultation and concluded in September.

But MPAG have now taken the decision to seek legal aid in order to help in their quest to turn the site into a public park.

Instructed by the group, TLT Solicitors wrote to the Department of Infrastructure (Dfl) on June 11 to issue a call-in request for the Council’s planning application.

It is the second time the group have requested the planning application be called-in after an initial appeal on March 29.

The request on that occasion was declined on 19 April as the Department stated it “does not feel it is appropriate to direct that the application be called-in at this time”.

However, MPAG believe they have raised substantial issues relating to the planning application and stated “in the interests of fairness and transparency we request that the Department provide clear and detailed reasons for refusing the call-in request”.

The group claim the proposals are “significantly contrary” to the Council’s extant Magherafelt Area Plan 2015.

Both the Department and the Council described the application as the development of an existing ‘brown field site’. Although, MPAG say the majority of the application is identified as an area of Open Space under the aforementioned Area Plan.

In the Council’s 2030 Draft Plan, they identified ‘brown field’ sites as a priority for new developments, and MPAG have raised concerns with the Department that this “incorrect description” may result in a “prejudicial decision” being issued.

Following a Freedom of Information (FOI) response, as far back as 2002 Magherafelt District Council discussed proposals for the development of a former refuse tip at Mullagh, Maghera. MPAG believe this large site is viable for industrial development offering the same strategic location as the former high school site.

For this reason, MPAG raises serious concerns with regards to the Council’s failure to consider alternative sites.

Despite the obvious opposition to the plans, members of the public remain in the dark as Mid-Ulster Council stays tight-lipped over its plans.

Speaking to the Mid-Ulster Courier, a spokesperson for the Maghera Park Action Group said they have requested a call-in for the application to ensure accountability in the planning system.

“Taking legal advice was a huge stretch for the Group but, when up against the resources available to Mid-Ulster Council, we felt it was a necessary step in ensuring protections for Maghera's environmental gem,” they said.

“This is the triggering of a normal planning process mechanism. As the proposed development is described as 'major', and this is a Council applying to itself for planning permission, the Department of Infrastructure has a role to play in ensuring impartiality. Should there be any concern around the background of a development, interested parties can request the application be 'called-in' to DfI HQ.

“The Department have advised the group, after the initial request in March, that they were keeping an eye on the application and should further background information become available it could be called-in at any point through the consideration process. The second request, at the beginning of June, is currently with the Department awaiting a decision.”

The spokesperson added: “The Maghera community is using all its resources to campaign for the preservation and people-centred development of this wonderful, wood and parkland site; a community asset, second to none!”

Over 13 months after the original planned completion date of the industrial hub, huge question marks remain over the site which the Council bought from the Education Authority in 2015 for a fee of around £400k.

It was identified as a strategic site for economic development purposes within the Maghera Development Framework Plan 2017-30.

New chair of Mid-Ulster District Council, member of the Planning Committee and local councillor, Martin Kearney refused to be drawn on the planning application, however he hopes the planned works for Maghera in 2019 will “command broad agreement” throughout the community.

“As there is a live Planning Application lodged with the Mid-Ulster Council it would not be proper, therefore, at this time to comment on this issue,” he told the Courier.

“2019 promises to be a very important year for the town of Maghera and surrounding area. I believe the Maghera Physical Development Framework and Action Plan (2017-2030) available both on the Council website and in hard-copy clearly plots the way ahead that will hopefully command broad agreement across the Maghera community.”

The Courier previously put a number of questions to the Council regarding the proposals. It was enquired as to what stage the process is currently at – to which there was no reply from the Council.

Despite the public objections, which have seen nearly 200 people protesting at the gates of the former high school site, was the Council confident the project will proceed – again, no reply.

According to a FOI Request, seven businesses have expressed an interest in the site. The Council was asked whether they are pleased with the interest expressed thus far, and if there is a target number in mind – there was no response.

While the timeline listed 13 months ago was indicative and of course, subject to change, the Council was questioned if they are content with the progression and what had delayed the process so far.

It was asked whether the Council have any indication when a tender process will begin, following the submission of the planning application back in 21st December 2018.

Additionally, it was put to them if there was a revised timeline, as the dates in the previous plans were now passed.

A Council spokesperson responded to the timeline query by stating: “The timeline outlined to Development Committee on 10 May 2018 was indicative and is subject to the consideration and subsequent determination of the current planning application.”

The Council was also questioned over a quantity of asbestos which had been found on the site following a ground assessment from their Environmental Health department.

A document seen by the Courier revealed contaminated land (asbestos) at the site and the Council confirmed plans to erect a 0.6m thick physical barrier at the site.

It has also emerged that the Council has failed to respond to requests from concerned members of the public to issue tree preservation orders to protect 32 mature trees on the site. A bat survey revealed it is home to 13 oak trees along with a mixture of sycamore, beech, horse chestnut and other trees. All were found to have moderate or high bat roosting potential.

In light of the information presented to the Department, MPAG remains firmly of the opinion that the application would be better determined by the Department.

“As this is the first industrial park spearheaded by a local Council, it could set a precented for other councils across Northern Ireland to make significant planning applications to themselves that are contrary to local development plans,” read the letter to the Department.

MPAG have also confirmed the NI Information Commissioner are now pressing Mid-Ulster District Council to reply to a FOI request about business interest in the High School site as the statutory deadlines have since passed.