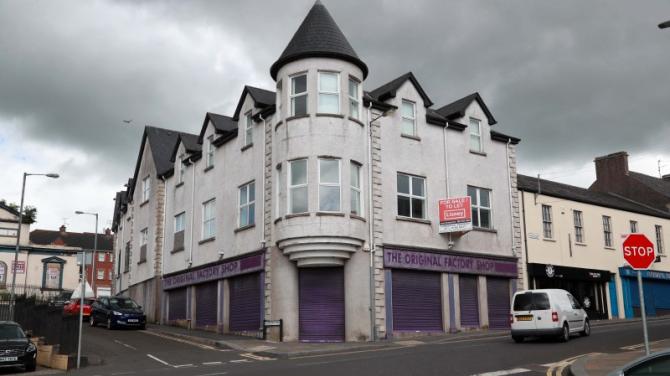 THE site of The Original Factory Shop in Dungannon, which closed its doors last Christmas, has been put on the market.

The large building on William Street extends to more than 15,000 square foot over three storeys.

It also has 19 car parking spaces to the back o the building.

The mixed use commercial building has ground and first floor retail and second floor office space. It is being marketed by Lisney, with the price only being revealed upon application.

The Original Factory Shop shut on Christmas Eve 2018 and was one of 32 stores closed by the ailing firm across the UK.

At the time, it was understood that a clause in the CVA (Company Voluntary Arrangement) allowed the landlord of the shop’s Dungannon premises to serve notice on The Original Factory Shop.

Despite the company describing the Dungannon store as ‘well performing’, they were left with no choice but to confirm that the store would close.

Speaking about the decision to close the store at the time, a spokesperson for The Original Factory Shop said: “It’s a great disappointment to have been served notice on this store. We tried really hard to find a suitable agreement with the landlord, especially as this is a store that has been performing well and where we are proud to play an integral part in the community.”

At the time of the closure, it was understood The Original Factory Shop had been hoping to idenitfy another site for the store in Dungannon.

However, no alternative site has as yet been identified.

The Courier contacted The Original Factory Shop in relation to any future plans for a store in Dungannon, but they had failed to respond to enquiries at the time of going to press.