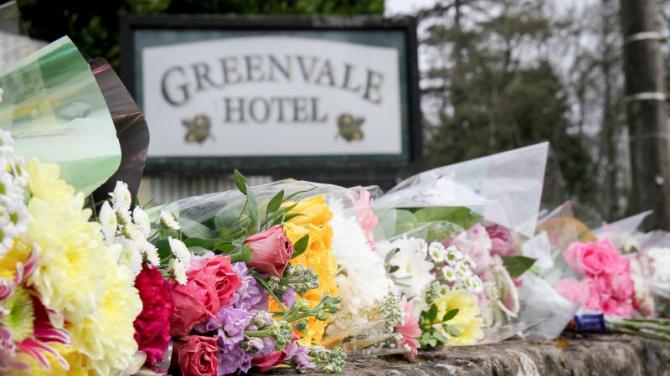 THE families of three teenagers crushed to death outside the Greenvale Hotel on St Patrick’s night are considering launching legal action to block the venue’s planned demolition.

Morgan Barnard, 17, Lauren Bullock, 17, and Connor Currie, 16, were killed as they queued for a disco at the hotel in Cookstown on March 17.

Three months on from the tragedy, the venue’s owner Michael McElhatton has submitted a planning application to Mid-Ulster District Council to bulldoze the hotel on Drum Road and build five detached luxury homes on the site.

Architectural drawings provided to planning officials on Tuesday last show proposals for five two-storey 2,700 sq ft houses, each with a stand-alone garage, surrounded by walls and accessed by an electric gate.

However, the site remains a key part of the inquiry and some of the bereaved families confirmed they may take legal action to halt the building’s removal until all investigations are complete.

Morgan Barnard’s father James Bradley said the site is “critical” to the ongoing investigation into that fateful night in March.

“While I would welcome the Greenvale being demolished I would have concerns about when the demolition takes place because this venue is critical to the ongoing investigation and could have an evidential value at a later date,” he said.

Solicitor Darragh Mackin, of Phoenix Law, who acts for Morgan’s family, said they “will not hestitate” to launch legal action if necessary.

“We have been instructed to write to the relevant authorities seeking assurances that no demolition will take place until after the relevant investigations have been completed,” he added.

Following the statements, Mr McElhatton assured the relatives of those who died he will not demolish the Greenvale Hotel until the investigation is concluded.

A spokesperson on his behalf released a statement confirming a planning application had been made “for the redevelopment of the Greenvale Hotel site”.

However, they stated the hotelier has no plans to demolish the venue “for at least four years”. It is currently restricted to hosting only weddings and private functions at the hotel ahead of a full entertainment licence renewal in October.

There had been widespread confusion as the news broke on Tuesday and the Courier understands staff at the hotel were not informed about the plans prior to them being submitted.

This led to conflicting information filtering out regarding the future of the hotel, however Mr McElhatton’s spokesperson confirmed they will be fulfilling all booked events.

“There are weddings booked at Greenvale up to 2022 and assurances have been provided to families that all these bookings will be honoured,” they said.

“There are no plans to make any change to the hotel or its operations for at least the next four years.”

Sinn Féin Mid-Ulster MP Francie Molloy said the planned redevelopment of Greenvale Hotel will bring a “mixture of reactions and emotions for many people”.

“The news of the planning application will have come as a surprise to many people and of course it is only natural that their thoughts will be drawn to recent events at the Cookstown venue,” he said.

“It is though, only an application at this very early stage and is a decision that the owners will not have taken lightly given the events of St Patrick’s night.

“However, this process will not happen overnight and any development, if it happens at all, will not take place quickly, it would be a number of months before planners will have made a full decision.”

A number of investigations are currently active into the events surrounding the deaths of the three teenagers. The PSNI’s initial response has been referred to the Police Ombudsman to independently investigate.

That is running alongside a criminal investigation and two men, including the hotel owner, remain on bail.