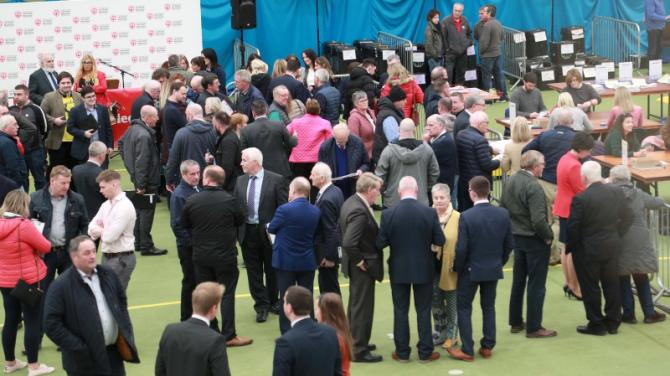 THE old adage that ‘the more things change, the more they stay the same’ could broadly have been applied to the story of the 2019 Mid-Ulster District Council election.

Sinn Fein retained their position as the leading party by some margin, while the DUP strengthened their grip on second place.

The balance between nationalist and unionist members of the Council also remained the same, with the balance tilted 25-15 in favour of nationalism.

However, this will constitute a fairly positive election for unionism, as seats which might have been at risk in Dungannon and Moyola were retained, albeit the latter was held in the tightest result of the election.

Sinn Fein can’t be too disappointed, either, however, as while they dropped a seat, they still remain by far the largest party on Council, while the SDLP will be pleased to have consolidated their vote and made a real push to add an extra seat in Moyola.

Only two seats were lost and gained in the 40 up for grabs across the seven District Electoral Areas (DEAs), with Sinn Fein dropping a seat in Torrent to Independent Republican Dan Kerr, who stormed into the Council chamber, while the DUP took the sole Ulster Unionist seat in Magherafelt, in the process relieving George Shiels of his spot on the Council.

Other than that, the parties retained their seats gained in 2014, though there were a number of new faces elected under the same party banners.

Perhaps the most notable of these is the DUP’s Kyle Black, son of the murdered Cookstown prison officer David Black.

His thumping performance in Carntogher saw him come within a whisker of reaching the quota on the first count as he increased the DUP vote share by more than six per cent.

Cllr Black came second on first preferences in the district, finishing above both SDLP group leader Martin Kearney and the outgoing Chair of the Council, Sinn Fein’s Sean McPeake, the latter of whom was elected without reaching the quota.

Cllr McPeake’s party had a number of new faces holding seats the party took in 2014, including former Mid-Ulster MLA Ian Milne and Donal McPeake in Moyola and Cora Groogan in Carntogher while it was the same situation for the SDLP in Cookstown as Kerri Hughes coasted in on the first count there, taking the seat previously held by Tony Quinn.

There were farewells, too, to some familiar faces, as the aforementioned George Shiels was joined by party colleague Robert Mulligan in departing the local political scene, Mr Mulligan unseated by his running mate Meta Graham in Clogher Valley.

Tears were shed in Torrent as Mickey Gillespie, who had held a Council seat in the area for 22 years, was the casualty of the surge for Independent Dan Kerr.

The rest of the candidates returned remained the same, with Dungannon having the distinction of being the only DEA to elect the same Councillors as it did in 2014.

While Independent Republican Barry Monteith has made a habit of topping the poll in Dungannon in recent years, it was the DUP’s Clement Cuthbertson who surged to a stunning victory in the town, polling more than 1,800 first preference votes as the party cemented its place as the biggest party in the town.

Sinn Fein were left disappointed as both seat gains they targeted, in Carntogher and Dungannon, fell short, the former falling well short, and that was compounded when they saw in the region of 200 votes cast for them had to be excluded by counting officals as two ticks had been placed beside their candidates’ names, with some voters presumably not quite au fait with the methodology.

Cllr Cuthbertson’s Dungannon tally was only bettered in the Council area by his party colleague Frances Burton in Clogher Valley, who got the award for biggest personal vote in the area.

The wooden spoon for lowest number of first preference votes was taken by the Workers’ Party Hugh Scullion in Moyola with just 95 votes.

Overall, the Sinn Fein share of the vote fell compared to 2014 by just over one per cent, while the DUP saw a big jump of over 5.5 per cent, with the UUP vote falling by in the region of four per cent and the TUV vote collapsing, though they ran just one candidate.

The SDLP saw a modest increase, while Aontu and Indepdendents, boosted largely by the addition of Dan Kerr to the political scene, created an increase in the overall nationalist vote.