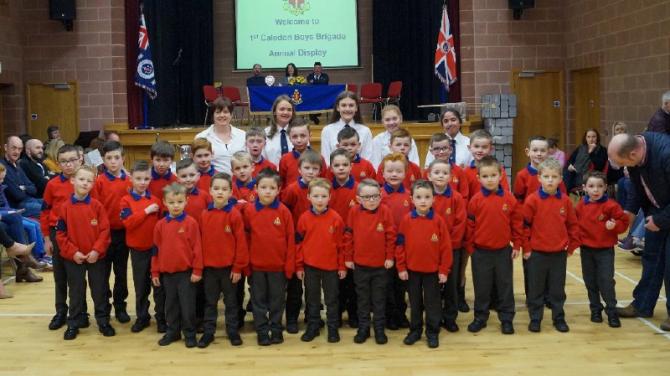 PARENTS and friends gathered together for the 85th Display of 1st Caledon Company of the Boys’ Brigade on Saturday 30th March 2019.

The opening hymn, Scripture reading and prayer by Rev. Joanne Smith, followed the ‘Fall In’ of the Company. The Chairman, Rev. Bill Atkins, then welcomed everyone present.

He gave a special welcome to the Guests of Honour, Mr. Richard and Rev. Joanne Smith, the new local Presbyterian Minister and her husband, along with Mr. Walter Mullan, Honorary Vice-President of the Mid-Ulster Battalion.

The Company Section Drill Squad took to the floor first, under Squad Commander, Pte. Aaron Morrow. They carried out intricate drill movements with precision, demonstrating how they were placed 3rd in the Battalion Squad Drill Competition, along with Aaron being placed 3rd as Squad Commander.

The vaulting team gave a polished performance, showing off the physical capabilities of the boys. The Anchor Boys delighted the audience with a version of The Walls of Jericho, displaying some of what they had learnt about during the session, and got some help from their daddies to perform their Superheroes song.

The Company and Senior Sections caused hilarious laughter with their sketch, When I Grow Up, while the Junior Section held the full attention of the audience for their Figure Marching and sketch The Whole Armour of God, which they had covered during their Bible classes. The Anchor Boys brought the programme to a close by demonstrating what a real M&S Easter is, Jesus saying to all afresh that he is the Messiah and Saviour.

Rev. Smith presented the awards and prizes as follows:

In his remarks, Mr. Smith stated that he was delighted and honoured to be a special guest at a Boys’ Brigade display, if not a little bit daunted. He praised the boys and leaders for all their hard work throughout the session and for the effort that had been put it for the display. Rev. Smith then read from Ephesians 6 re-emphasising the need for us all to out on the whole armour of God.

Mrs. C. McFarland was also presented with a gift by Philip Nicholl from the all the boys and leaders in the Company for her dedication to the Company over many years, as she decided to step down from her role as Junior Section Officer-in-Charge.

After the singing of the National Anthem and the benediction, a very enjoyable evening was brought to a close. Afterwards, the Parents’ Association served supper to everyone, for which Rev. Atkins said Grace.