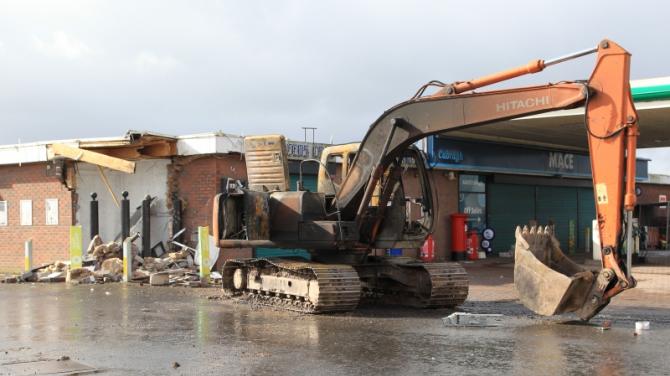 POLITICIANS have condemned an incident at the weekend in which an ATM was stolen in a daring raid at a Dungannon filling station.

Detective Inspector Trevor Stevenson said: “Thieves used a digger to remove the ‘built in’ cash machine from the Cabragh Filling Station on the Ballygawley Road at around 4.15am causing substantial damage to the building.

“We believe the digger was stolen from a business a short distance away, which caused damage. The digger was set alight at the scene immediately after the theft.

“I am appealing to anyone who was in the area between 4am and 4.15am and saw what happened, or who has information which could assist our investigation to call us.

”In particular, I am appealing to anyone who saw a jeep-type vehicle towing a trailer in the Gortlenaghan Road/Ballygawley Road areas around these times to get in touch with detectives in Omagh CID by calling 101, quoting reference 340 of 10/03/19.”

DUP Councillor for Clogher Valley Wills Robinson said: “This is another assault on rural communities.  Tyrone has been plagued with ATM thefts.