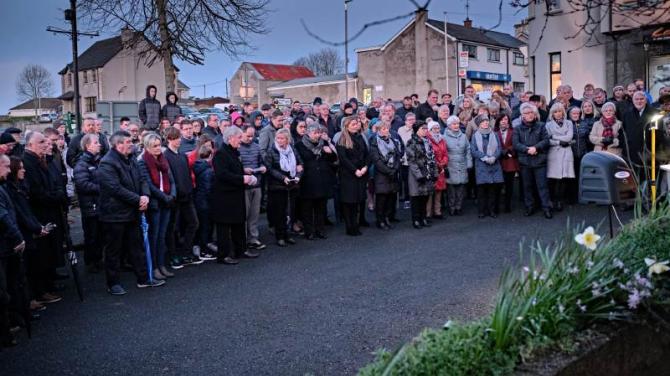 RELATIVES and friends of three Coagh men murdered by the IRA in the village in 1989 gathered at the spot where they were gunned down to mark the 30th anniversary of their deaths on Thursday night last.

There was a large gathering at the Memorial Service which took place in the village to mark the 30th Anniversary of the murder of well known and highly respected locals Leslie Dallas, Austin Nelson and Ernie Rankin.

The three friends were murdered by the IRA as they stood outside the garage of Mr Dallas in Coagh on 7th March, 1989 and their deaths sent shockwaves throughout Mid-Ulster.

The short Memorial Service was held outside the former Dallas garage and was conducted by the Rev Hugh Ross.

A relative, speaking on behalf of one of the familiies, told the Courier last week it was disgraceful that 30 years on no-one had been brought to justice for the murders.

Read more in this week's Courier