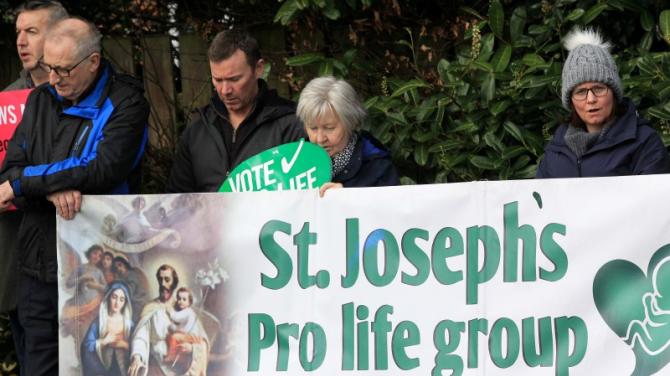 AROUND 30 anti-abortion campaigners gathered at the gates of St Patrick’s Academy on Thursday last to make their protest against the presence of the man who signed abortion into law in the Republic of Ireland, President Michael D Higgins.

The Tyrone Pro-Life Network turned out to make a stand against the Catholic Maintained school, which was staging the official opening of its new £27 million state-of-the-art facility, inviting President Higgins to the event as a special guest and keynote speaker.

Protesters claimed the school had objected to them standing at the entrance to the school, but they were situated across the road as the convoy of cars carrying the President and his entourage arrived at the school.

While there was a Police presence in the area, it was a very peaceful protest, as those in attendance recited the Rosary and sang hymns.

One of the leaders of the anti-abortion grouping, Carrickmore native Catherine Sewell, said it was “not right” that President Higgins should have been invited to the school.