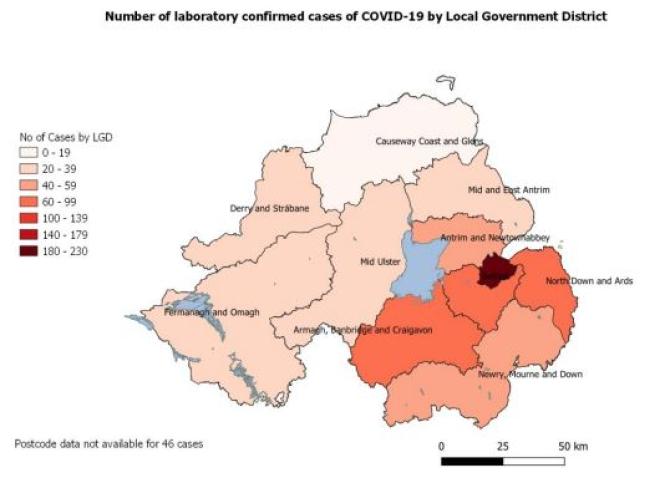 TWENTY-ONE cases of Coronavirus have now been confirmed in the Mid-Ulster District, the latest figures have revealed.

The Public Healthy Agency also confirmed on Thursday the number of people who have died in Northern Ireland after being diagnosed with Covid-19 has risen to 36.

That's six more deaths since this time yesterday, the joint-worst day in NI since the outbreak began.

It was also revealed there has been a further 85 new cases, bringing the total number of cases to 774.

Of those confirmed cases, 384 were male and 389 were female.

Across the United Kingdom, a total of 2,921 patients have died in hospital after testing positive for the Coronavirus, the Department of Health said, up by 569 from 2,352 the day before.

In Northern Ireland the virus has affected a broad range of age groups, with 218 of the confirmed cases in patients over 70 years of age.

And in the latest Coronavirus update on Thursday afternoon, officials outlined the number of positives cases across the province by Local Government District.

The highest number of confirmed cases are in the Belfast City Council area which has had 226 infected patients.

The fewest number of cases have been recorded in the Causeway Coast and Glens area, with 19 positive tests.

Mid-Ulster has recorded the second lowest amount of positive cases, with 21 patients being diagnosed with Covid-19.

A total number of 6,889 Coronavirus tests have been carried out in Northern Ireland of which 6,109 returned negative.

The Southern Trust has completed 1,111 tests and the Northern Trust carried out 701.